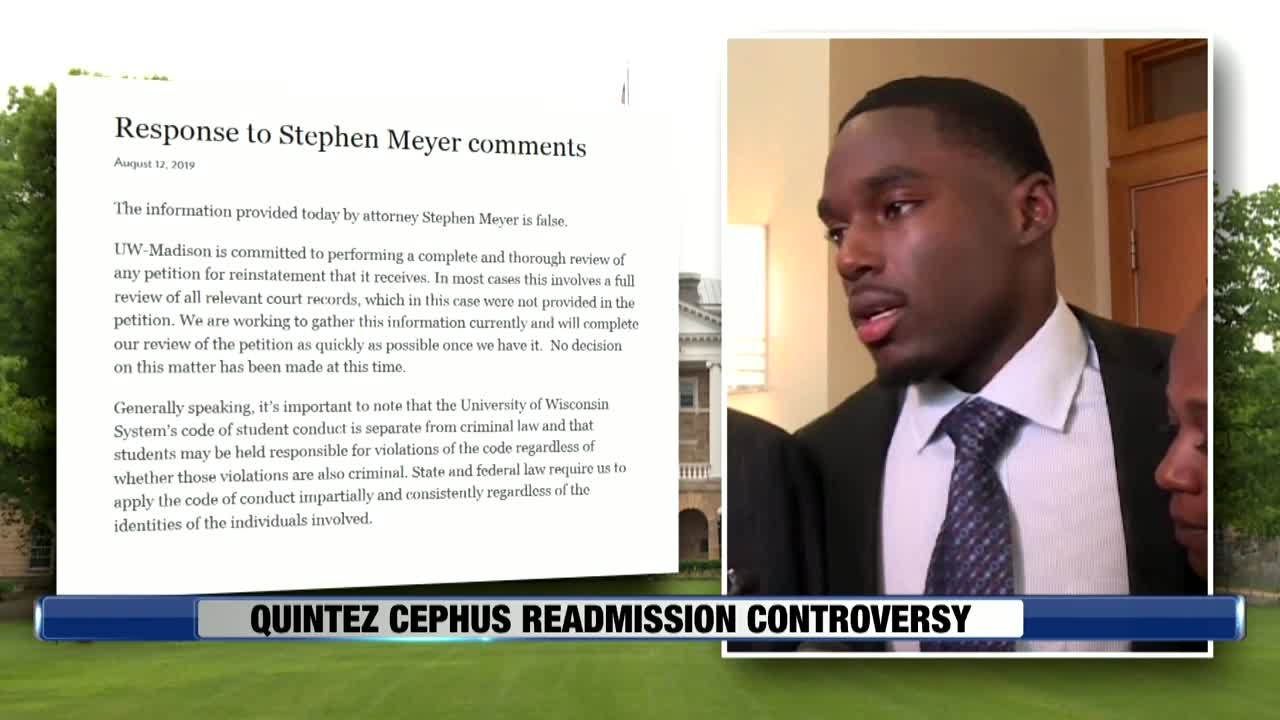 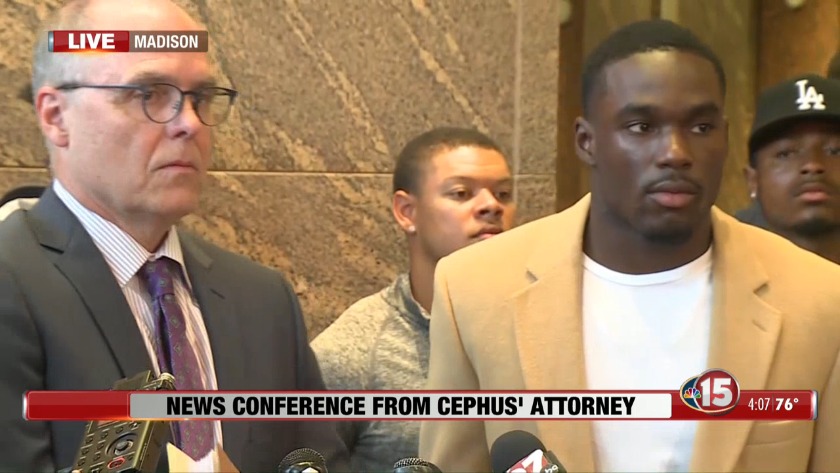 MADISON, Wis. (AP / WMTV) -- The attorney for former Wisconsin football player Quintez Cephus says university officials are sending a "clear message" they don't want the former Badgers wide receiver back despite his acquittal in a sexual assault case. The university denies the claim.

Attorney Stephen Meyer said Monday that discussions have collapsed. University spokeswoman Meredith McGlone has told NBC15 the review process doesn't have a time-frame and each case varies based on what the University is reviewing.

"The university needs to think about how the nation-wide public and how people of color will view this institution," Meyer told reporters Monday.

Meyer says the University is dragging out this process and needs to correct their wrong doing of expelling Cephus.

"I am not angry at all," Cephus said. "The whole time, I've had the support of my brothers, and everybody who knew me. And I've had a chance to show my real character outside of sports, and I took that very seriously. And I was able to be happy through the whole situation. It was ups and downs but my brothers supported me the whole time, and I've learned a lot from it."

Cephus filed a petition for readmission last week, just days after a jury found him not guilty of sexually assaulting two students who said he had raped them.

However, the UW released a press release Monday saying the information released by Meyer is "false."

UW-Madison is committed to performing a complete and thorough review of any petition for reinstatement that it receives. In most cases this involves a full review of all relevant court records, which in this case were not provided in the petition. We are working to gather this information currently and will complete our review of the petition as quickly as possible once we have it. No decision on this matter has been made at this time.

Generally speaking, it’s important to note that the University of Wisconsin System’s code of student conduct is separate from criminal law and that students may be held responsible for violations of the code regardless of whether those violations are also criminal. State and federal law require us to apply the code of conduct impartially and consistently regardless of the identities of the individuals involved.

Meyer says the university has made clear it won't make a decision until "well after the semester has started."

Cephus was joined at Monday's press conference by Badger football players. Chris Orr, Badger linebacker, says Cephus is their brother and once a Badger, always a Badger. Orr, Jonathon Taylor and five other UW football players sent a letter in support of Cephus to UW-Madison Chancellor Becky Blank.

NBC15 reached out to UW Athletics to see if they have a deadline to set their official team roster. They responded that they are not getting into hypotheticals.