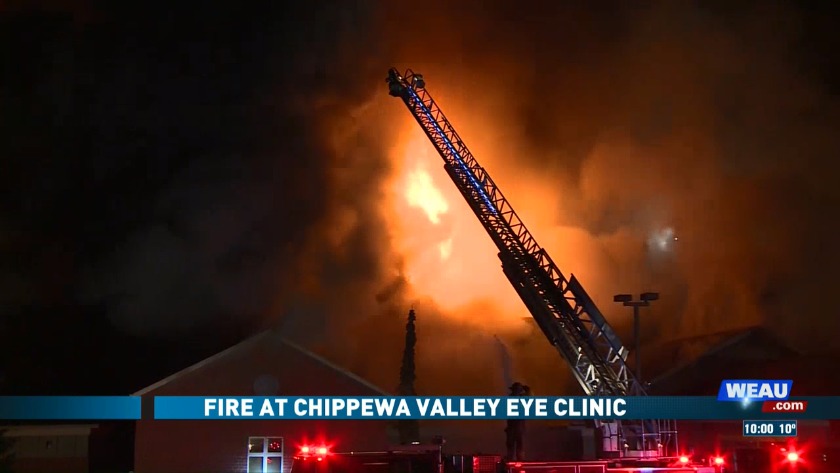 EAU CLAIRE, Wis. (WEAU) -- Firefighters say a fire at a local business appears to be under control Thursday night.

The fire started a little after 6 p.m. at the Chippewa Valley Eye Clinic at the intersection of London Rd. and Damon Street in Eau Claire.

According to Deputy Chief Allyn Bertrang with Eau Claire Fire Rescue, the fire was contained to the eye clinic.

There's no damage estimate at this time, but he says there is substantial damage to the building.

The cause of the fire isn't known at this time. No one was hurt.

Bertrang says approximately 25 personnel are at the scene. He expects firefighters to remain at the scene for several more hours and possibly through the night to make sure it's safe.

Bertrang says the cold weather is presenting a few problems while fighting the fire because water from the hoses is freezing and creating slick surfaces. Firefighters are using salt and sand to help with that.

In a Facebook post, the Chippewa Valley Eye Clinic says the Eau Claire location will be closed for the foreseeable future, but adds all scheduled surgeries will be unaffected by the fire.


EAU CLAIRE, Wis. (WEAU) -- Eau Claire Fire Rescue is on the scene Thursday night of a fire on the city’s south side.

The fire is at Chippewa Valley Eye Clinic at the intersection of London Rd. and Damon St., just off of State Highway 93.

WEAU has a crew on the scene. Stay with WEAU 13 News for updates.

DWD: 1 in 6 in Janesville/Beloit area looking for work, Madison's 11.8% lowest in state

DWD: 1 in 6 in Janesville/Beloit area looking for work, Madison's 11.8% lowest in state