Evers: ”Realities we face are bigger than me or any political party” 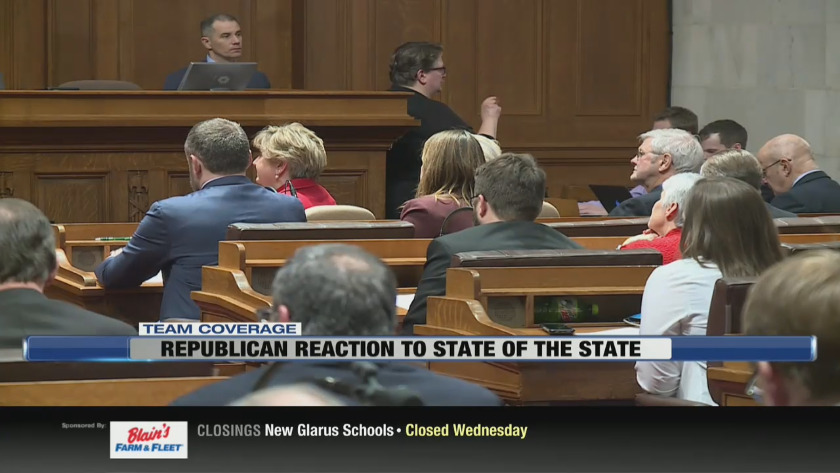 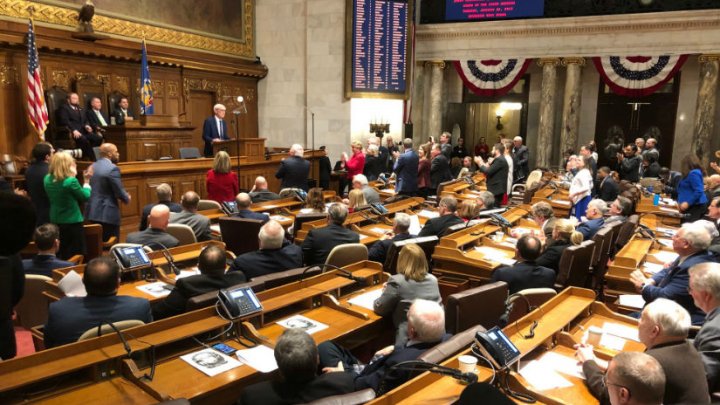 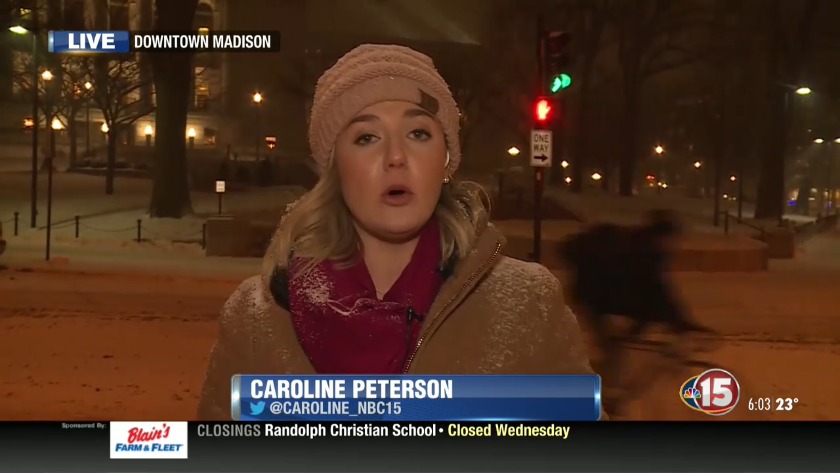 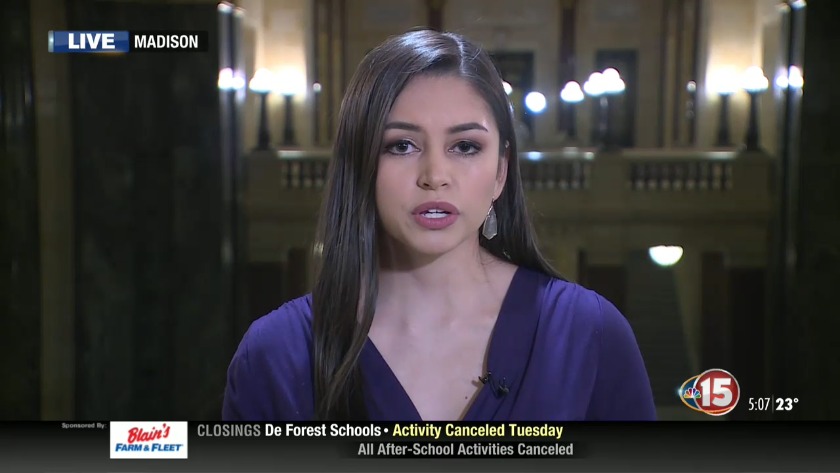 5PM State of the State Preview 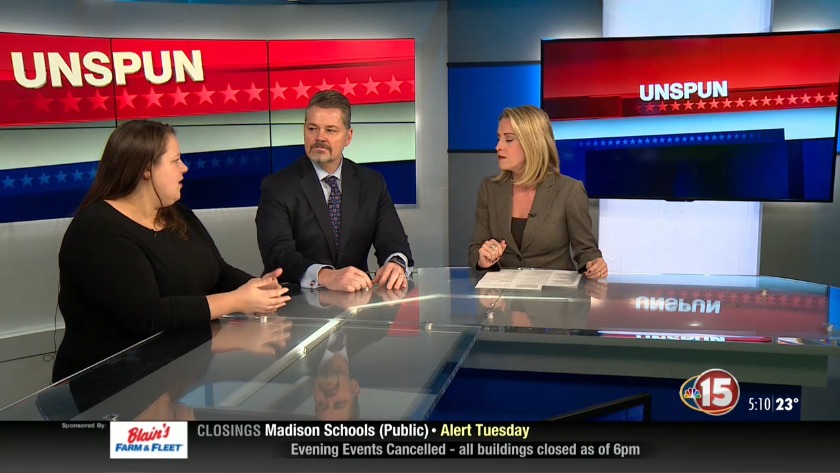 5PM Unspun ahead of State of State address 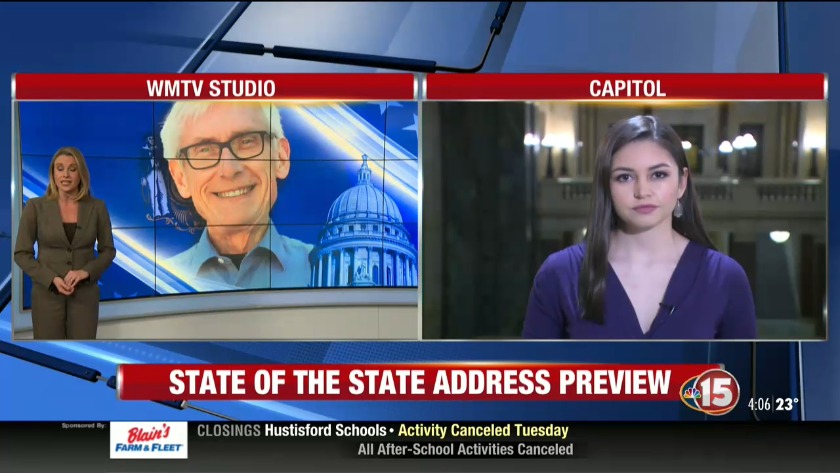 MADISON, Wis. (WMTV/AP) - Democratic Wisconsin Gov. Tony Evers is using his first State of the State to bring bipartisanship to the state capitol.

“The realities we face are bigger than me or any political party. The magnitude of our challenges requires us to put people first because, as I’ve said, that is the promise of our service,” sad Gov. Tony Evers.

He said the economy remains the top priority.

Evers used his address to call out poverty.

“The opportunity we have to offer is not just the number of jobs we create; it’s counted, too, by the number of workers who will work forty hours each week and still won’t make enough to keep their family out of poverty.”

Earlier in his address, Gov. Evers called out racial inequality in our state and wants to redirect spending in the state.

“We are a state forged by the Wisconsin Idea--the notion that education informs our public policy and that knowledge should embrace the communities we're called to serve,” said Evers. “Today, we are also a state among the worst to raise a black family, and we are a state that’s spending more on corrections than our entire UW System.”

Rep. Chris Taylor said she found that the speech closely followed Evers' campaign promises, including his focus on education improvements.

Evers plans to introduce his budget in the coming weeks on several key topics including education, health care, and transportation. He is labeling his budget pan as "The People's Budget."

Several Republican lawmakers said they applauded Gov. Evers on pushing for bipartisanship, however, they said they disagree with how is approaching certain issues, including medicaid expansion and tax cuts for the middle class.

"We are not going to higher taxes, we are going to cut taxes. In fact, we are for the middle-class tax cut he was talking about, but we aren't going to pay for it by taking away from the farmers and small business people," Sen. Alberta Darling said.

Wisconsin Assembly Speaker Robin Vos said he is unwilling to compromise when it comes to expanding government-run healthcare.

"What we are going to do is look for things that we know we can find bi-partisan agreement on. His tax cut with our surplus, the pre-existing coverage bill is taking up at least one of the things he asked for in the bill. That is called compromise," he said.

Democratic representatives said that they felt optimistic about the messaging and tone in Evers' speech.

"It's a new tone, I think Governor Evers has established that from day one," said minority leader Rep. Gordon Hintz. "This isn't somebody who's running to be president or running for the next election, he's talking about challenges that face the state of Wisconsin right now that we need to deal with."

Education
He plans to return two-thirds funding for schools across Wisconsin. In addition to the funding promise, Evers wants to increase resources for special education. His budget will provide $600 million increase in special education funding. School districts would then allocate its resources to other areas.

“We’re not just going to increase support for our kids with special needs,” said Evers. “We’re going to get to work on closing the achievement gap for low-income students and students of color.”

To address the achievement gap, Evers hopes the State Legislature will approve his Urban Initiatives programs. He describes the programs as empowering “minority students in our state’s highest-need districts by expanding early childhood education and summer school grant programs.”

Health Care
Gov. Evers asked Attorney General Josh Kaul to withdraw from a lawsuit that would affect coverage for those with pre-existing health conditions.

That order appears to fly in the face of a law passed in last month's lame-duck session requiring legislative approval to withdraw.

Evers announced in his State of the State speech that he made the directive to Kaul. He did not say why he thinks he has the authority to make such an order given the law change.

He also wants to expand Medicaid in Wisconsin. According to the nonpartisan Legislative Fiscal Bureau, this will enable an additional 76,000 Wisconsinites to have access to affordable health care.

Evers already signed an executive order creating a "Healthy Communities Initiative." It calls on the Department of Health Services to develop a plan to ensure that more people have access to affordable,and quality health care.

Evers announced Tuesday he plans to form a task force to work on a bipartisan solution to the transportation funding crisis. The task force will solicit feedback from key partners from all regions of the state, all sectors of the economy, and users of all different modes of transportation.

On Tuesday, Evers declared 2019 as the "Year of Clean Drinking Water in Wisconsin."

In the coming weeks, Evers plans to issue an executive order to designate someone at DHS to address the lead crisis in Wisconsin. They will be in charge of securing federal funding for prevention and treatment programs.

"I don’t make promises I can’t keep, and I’m not going to propose things that we can’t pay for," said Evers.

He plans to fund tax relief by capping a corporate tax credit. 80 percent of which goes to filers making more than $1 million a year.

Read the remarks from the State of the State Address here:

“After eight years of strong Republican leadership, the State of Wisconsin is stronger than ever. With a booming economy, record surpluses, and more people working than ever before, Wisconsinites have much to celebrate. Unfortunately, we didn't hear any of that tonight from Governor Evers. Instead, our new Governor decided to cater to his base with hyperbolic accusations, vague promises, and a partisan platform that will take Wisconsin backwards. Like much of what we saw from him on the campaign trail, Evers’ speech was completely devoid of any real leadership. This speech makes clear what many Wisconsinites already knew: as Governor, Evers will be nothing more than an empty vessel that special interests and Democrat leaders can use to push their far-left agenda.”   - Mark Morgan, Executive Director of the Republican Party of Wiscosnin.

"I am disappointed that I was unable to join my colleagues for Governor Tony Evers’ first State of the State Address.  Unfortunately, an illness prevented me from being there in person, and I joined Wisconsinites from across the state in watching the speech from my home.
“I was happy to see the Governor salute Dr. Mike Leckrone, who is retiring as the Director of the University of Wisconsin Marching Band after 50 years.  I want to congratulate him in his remarkable and unforgettable years at the University.
“Tonight, Governor Evers put forth an agenda that puts the people of our state first. From expanding access to affordable healthcare, funding our schools, reforming criminal justice and addressing our deteriorating infrastructure, these priorities reflect a new era, and I am looking forward to working with the Governor to make Wisconsin work for everyone.
“Governor Evers has proven his dedication to the people of Wisconsin. He has already appointed a diverse cabinet, prohibited discrimination against the LGBTQ employees who serve our state, and laid out a plan to expand Medicaid, fund our schools, and address our transportation funding crisis. He is listening to Wisconsinites’ wishes to move past endless political battles and focus on the issues that our families care about.
“For too long Republicans have pushed an agenda that puts the wealthy and well-connected before our communities. It is time that we work across the aisle on proven solutions that will level the playing field, grow the middle class, and expand economic opportunities. Democrats are ready to take the lead this session on paving the path forward, and we are committed to getting things done.” - State Sen. Jon Erpenbach, (D) Middleton

"I was disappointed by the divisive tone Governor Evers set in this evening’s speech. Right out of the gate, he directed the independently elected attorney general to break the law and withdraw Wisconsin from the ObamaCare lawsuit. Shortly after, he rejected a tax cut that would benefit middle class families in favor of burdening our local farmers and manufacturers. He touted government run healthcare and increasing taxes as the basis for a budget, knowing full well that the Legislature will not support it. As disheartened as I am by the partisan aspects of Governor Evers’ speech, I still feel confident that we can find areas where we can work together. Whether it’s transportation, education, or through the bipartisan pre-existing conditions legislation we passed earlier today, I believe we can still find common ground on issues that will benefit Wisconsin families.” - State Rep. Jim Steineke, (R- Kaukauna) Assembly Majority Leader

“Gov. Evers’ first State of the State delivers for working families by laying out a vision to rebuild our middle class by prioritizing the health and well-being of working people. After eight long years, it’s refreshing to hear a Governor put forth a plan to create jobs and help working people get ahead. By investing in our roads and infrastructure, our neighborhood schools and services, expanding Medicaid, and ensuring safe drinking water by funding the replacement of lead water services to keep our families safe -- much of which is done by skilled union trades men and women who care deeply about the health of our water systems -- we can get our state back on track. We look forward to working with Gov. Evers as he continues the momentum for working families and builds on his Day 1 Executive Orders to treat every worker with dignity and respect while fostering a collaborative work environment. Wisconsin works best when unions are strong. By ensuring the freedom to collectively bargain together as a team, unions raise living standards, enhance workplace safety and build stronger, thriving communities.”  - Stephanie Bloomingdale, President of the Wisconsin AFL-CIO.