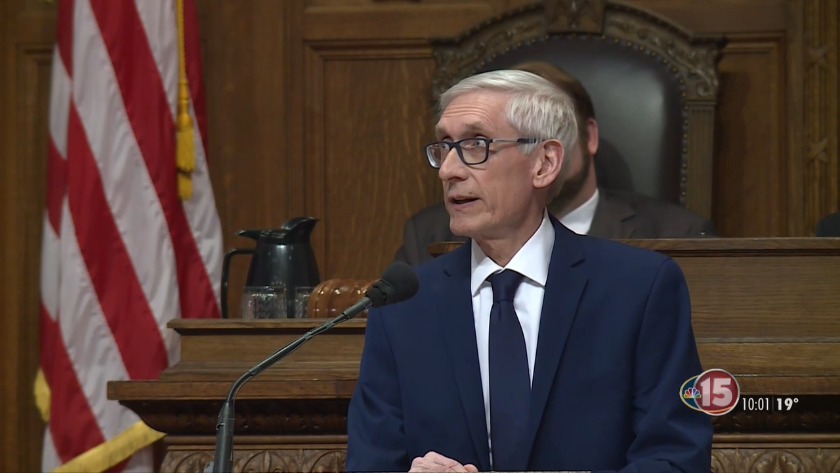 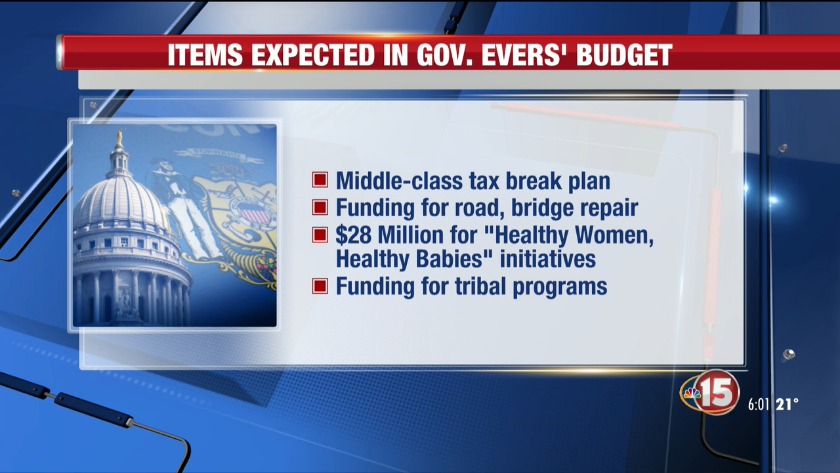 "At the end of the day, our budget is about putting people first," Gov. Evers said to a joint legislative session. "It’s about creating a Wisconsin that works for everyone--a Wisconsin for us. This isn’t the Tony Evers budget, the Democratic budget, the Speaker’s budget, or the Republican budget--this is The People’s Budget. And it’s one that we crafted together."

Gas taxes in Wisconsin would increase but the cost to fill up may actually drop under Gov. Tony Evers' budget.

To mitigate a proposed 8-cents-per gallon gas tax increase, Evers is calling for repealing the state's minimum markup law. That law prohibits the sale of gas below what it costs a retailer to purchase, resulting in a roughly 9 percent markup at the pump.

Evers estimates that doing away with that would shave 14 cents off the cost of gas, resulting in a net decrease in per-gallon cost.

His transportation plan released Thursday increases vehicle title fees and heavy truck registration fees, but does not increase the $75 registration fee paid by most vehicle owners.

Borrowing for roads would be the lowest level in 20 years, while $320 million in new money would go toward highway repair and expansion.

Evers says his budget will make people in the country illegally eligible for driver's license and ID cards. He says the move will make Wisconsin roads and communities safer and strengthen the state's economy and families.

Evers is also proposing that people in the country illegally be able to pay in-state tuition at a University of Wisconsin school, another item Republicans oppose.

Additionally, Evers called for a $1.4 billion boost in K through 12 education, a 10% income tax cut for the middle class, and a $150 million boost for the University of Wisconsin.

Gov. Tony Evers is releasing his first state budget to a skeptical Republican Legislature, with many of his proposals likely dead on arrival and others unlikely to pass without significant changes.

It will determine how much money goes to schools and prisons, the University of Wisconsin System and technical colleges, public assistance programs and corporate tax breaks.

.@GovEvers - the state’s former chief of education- is proposing a $150 million funding boost for the University of WI and that children living in the U.S. illegally would be eligible for in-state tuition #NBC15

The budget will also determine whether it will cost more to fill up at the gas station, go hunting or pitch a tent at a state park.

The budget announcement sparked reactions from both sides of the political aisle.

Assembly Majority Leader Jim Steineke (R-Kaukauna) voiced his concerns with the proposed budget in a statement: “Our hard-working families from around the state deserve a governor who is willing to come to the table and work towards real solutions,” Steineke said. “Instead, Governor Evers has proposed a budget chock-full of Madison liberal rhetoric and far-left ideals.”

Similarly, Senate Majority Leader Scott Fitzgerald said that the governor's budget missed an opportunity to work with the republican legislature, and said in a statement, in part, "Governor Evers campaigned on bringing people to the table, however Republicans weren’t even consulted before he rolled out one of the most liberal budgets in Wisconsin history."

However, State Assembly Assistant Democratic Leader Dianne Hesselbein (D – Middleton) voiced her agreement with the proposal: "Our public schools, healthcare and infrastructure are central to this budget. Homeowners, small businesses and the middle class are getting the tax relief they deserve. Working families can finally get ahead in an economy built to work for the people."

Rep. Shelia Stubbs (D-Madison) said in a statement that Evers' proposal "is truly a people’s document that prioritizes the needs of
children, families, and communities across Wisconsin."

Attorney General Josh Kaul said in a statement he was glad to see resources to support the criminal justice system, saying in part, "By adequately funding the state crime labs, allocating resources for more prosecutors, and increasing funding for treatment and diversion programs, we can make Wisconsin safer.”

The Republican Party of Wisconsin, through a statement from Chairman Brad Courtney, raised concerns that Gov. Evers would "undo" work done in the past years, saying in part, "Governor Evers put forward a budget proposal that threatens to undo all of that – a proposal brimming with massive spending increases, tax hikes, and reckless, hyper-partisan proposals. Rather than responsibly fund the priorities of our state, Evers elected instead to score political points with his far-left base, all while gambling the fate of Wisconsin’s future."

Dane County Executive Joe Parisi approved of the budget, saying in part in a statement, "Governor Evers' budget proposal makes me excited for what lies ahead not only for our region, but for Wisconsin as a whole."

UW-Madison Chancellor Rebecca Blank said in a statement that she applauds "the new investments in the UW System proposed by Governor Evers today and appreciate his strong commitment to giving us the tools needed to continue providing a high-quality, affordable education for Wisconsin students."

Gov. Evers said he plans to raise the #gastax $0.08 per gallon. Will repeal a different tax costings $0.14 per gallon- says drivers will actually play less at the pump.

The new budget year begins in July, and if the legislature does not pass the budget by then, the old budget will remain in effect for the time being.