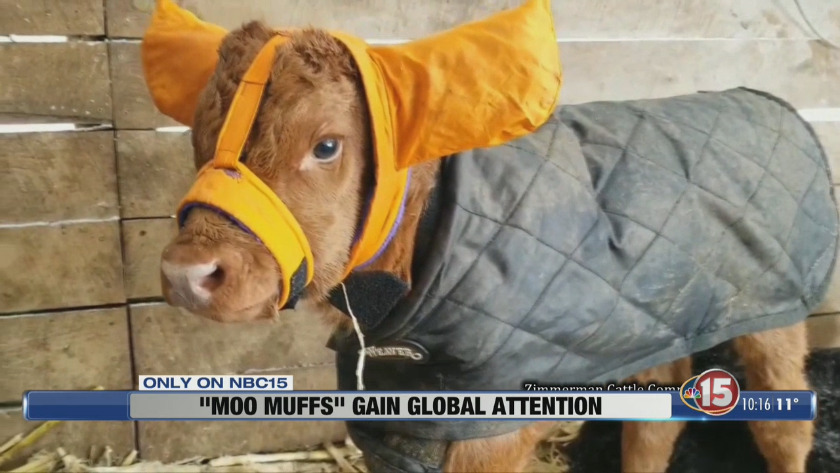 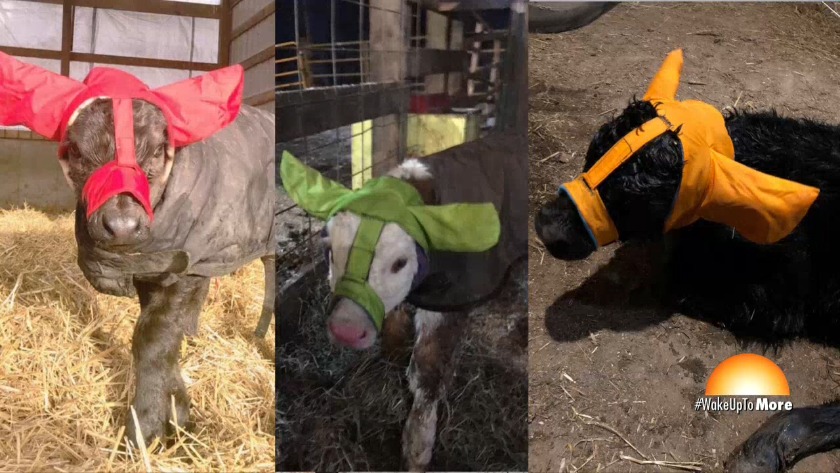 LONE ROCK, Wis. (WMTV) Remember these photos from three weeks ago? The NBC15 viewers on social media went crazy over these little calves with earmuffs. The post was shared more than 1,700 times.

Holly Poad with Triple P Farms, said they started making calf earmuffs last year. With this latest cold snap, they’ve been working as fast as they can to keep up with the demand.

She and her aunt are the creators of this small invention, "Moo Muffs" that seems to have "broke the internet."

NBC15's Amy Pflugshaupt first posted about them during the arctic cold snap in January, as farmers across the upper Midwest were looking for anyway possible to keep their newborn calves from getting frostbite.

"After that first little story that [NBC15] put up, I had a journalist from Ireland contact me to do a write-up," said Poad. "I've had magazines contact me more so to advertise in their magazine."

The idea behind "Moo Muffs" came after Poad's family lost their barn in a fire. She was looking for any way she could to keep her newborn calves warm and to avoid frostbite.

"We bought calf jackets and tried to make it work," said Poad.

In addition to calf jackets, she also bought a pair of calf earmuffs. In an effort to try to save money, she asked her aunt, Kim Ewers, if she thought she could make a pair for her. Ewers has been sewing much of her life and and owns her own embroidery business.

"The pair she as talking about was just fleece," said Ewers.

Ewers was afraid if the fleece got wet it could do more damage than good.

"I said, 'Holly if we do [the fleece] and it happens to be snowing, raining, or whatever it will be like putting an ice pack on these calves ears and they might totally fall off,'" said Ewers.

All of last year, the two put their heads together to come up with a design that would be more functional. After some trial and error, the two settled on this particular design.

"I went to my favorite store, JoAnn Fabrics," laughed Ewers. "And came up with this."

In addition to the fleece, "Moo Muffs" includes a water-repellent material on the outside and fully adjustable straps. They also used bright colors so if the calf is able to rub the Velcro or the cow licks the calf and the earmuffs come off, it will be easy to spot them.

In January, Poad decided to post the design on her farm's Facebook page and a few show cattle social media groups, selling them for $20 a pair. Orders started coming in right away.

"I was surprised," said Poad with a big smile on her face. "I thought we'd maybe sell five, ten pairs. I didn't think it was going to be anything that big."

The two have really made this a family business. In order to keep up with the demand, Poad said her cousins are helping to cut out the pieces so Ewers can sew more pairs. Right now, they are during out about 15-20 pairs a week.

Orders keep coming in every week. Poad said during the week of Feb. 18, she shipped out 12 pairs and there are six on a waiting list that will get shipped out Saturday or Monday.

Since both Poad and Ewers have full time jobs, they try to work on the earmuffs at night. Poad has been working extra long days to make sure her 75 head of cattle and newborn calves are well taken care of in these extreme winter conditions. In addition to owning her own embroidery shop and caring for her grandchildren, Ewers also drives a school bus.

"Lately with the weather the way it's been, my school bus driving has been a little less so that's helped out a little bit," laughed Ewers.

Poad said orders have come in from all around the upper Midwest. Farmers have ordered from Wisconsin, Wyoming, and Nebraska, to name a few. "Moo Muffs" have even gain national and international attention.

"It was a bit like wow. This is really taking off and I'm like wow, I need to really decide what I need to do with this because I think it could really turn into a good deal," said Poad.

"Who knows, maybe we'll be somebody," said Ewers with a big smile.

Because of the growing demand, Poad is currently working with a livestock supply company that would produce them. She said that would take the stress off of her aunt who's working around the clock to keep up with orders. She recently settled on the name, "Moo Muffs" and is working on building the business side of things, developing a logo. She's already looking forward as she explores making them for horses and other animals.

Triple P Farm in Lone Rock, Wisconsin (Richland County) is a family farm. Poad said her dad bought four cows in 1997 at a sale in South Dakota and it took off from there.