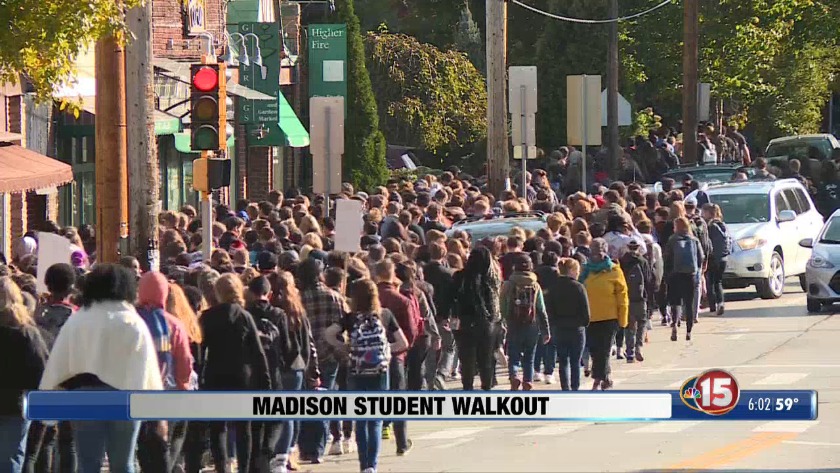 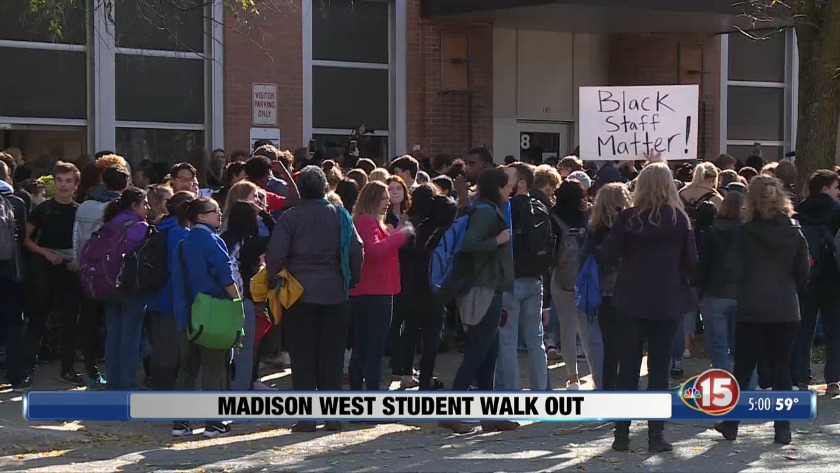 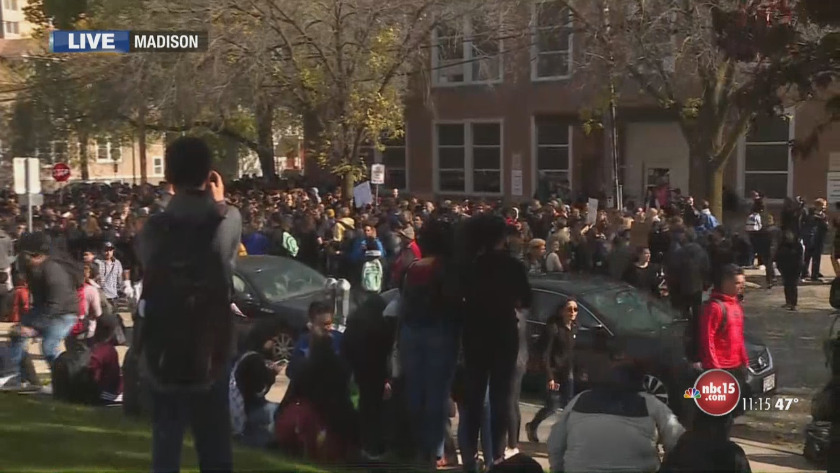 MADISON, Wis. (WMTV)-- Students from Madison West High School walked one-and-a-half miles from the school to school district offices Friday morning in support of a black security guard at the school who was recently fired.

Students walk out of Madison West High School in support of a security guard on Oct. 18, 2019. Marlon Anderson said he was fired after a student used a racial slur against him and he repeated the word when he told the teen not to use it.

The former security guard, Marlon Anderson, said he was fired after a black student used a racial slur against him, and he repeated the word when he told the teen not to use it.

Hundreds of students - as well as dozens of West High teachers and staff - walked from the high school on Regent Street to the Madison Metropolitan School District's Doyle Administration Building on Dayton Street near the Kohl Center.

Madison Metropolitan School District officials said they have a zero tolerance policy for employees saying racial slurs. But Marlon Anderson says he was just trying to defend himself, after a disruptive student unleashed a number of obscenities.

Protesters on Friday called school officials to reexamine the tolerance policy, which they say can be unfair to minorities.

During the walkout Friday, Noah Anderson, son of Marlon Anderson and the President of the West Black Student Union at West High School, said that there is a big difference between a slur and a statement.

Noah says the walkout is the beginning of an effort to make the community more inclusive.

“There has been tension in the MMSD for a while, and my dad [Marlon] just had to be a sacrifice for it. We’re going to get it fixed - especially with all the support that we see,” Noah said.

“We started with what we want as students and that we want our voices to be heard. Anytime you make any type of decision and that they need to go into the communities - anytime they make a decision that affect a certain group of people,” Noah said.

Claudia Mena, a West High student and one of the organizers of the protest, said the purpose of the walkout was not only to get Anderson's job back.

“We’ve seen a lot of racism not just at West [High School] but all around Madison. And so this is really starting to say that racism needs to end in Madison,” Mena said.

Mena says the walkout was organized through social media.

Madison Teachers Inc., a union representing teachers and staff, is filing a grievance on behalf of Anderson.

There will be an hearing date set within a few weeks as the grievance process moves forward, according to MTI executive director Doug Keillor.

Also on Friday, the Boys & Girls Club of Dane County said it has hired Anderson as their new Director of Program Operations. His first day on the job is Monday, and the position will be available until Anderson can get his old job back.

The musician Cher also offered on social media to pay for any legal bills he may acquire, if he and the teachers union goes to court with the school district.

An online petition has also been started to raise awareness and help get Anderson's job back.

The Black Student Union at Madison West High is hoping to connect with other area high schools and get the conversation started. The BSU has also invited a school board member to be in attendance at their meetings next week.

Students tell me these are teachers who took part in the walk out. One student said 17 substitutes had to be brought in to cover the remaining classes taking place. @nbc15_madison #NBC15 pic.twitter.com/gLa8j7Pz84

On Friday, the MMSD Interim Superintendent Jane Belmore released a statement thanking students for engaging in a conversation with school leaders.

"I want to thank our students for coming today and for engaging in a conversation with us. We support our students when they disagree with us and challenge us to do better. All of us here know that education is a dynamic social process. Sometimes it gets messy when we have to grapple together around deeply held values like what it means to be anti-racist. It is often difficult to find the best way forward to determine what are the right actions to take while always holding what is best for you students at the center. But grapple we must.

This year, decisions around how to respond when a racial slur is used in school settings have been made based on practices established last year when the district took a strong stance in response to incidences of the use of racial slurs - that racial slurs will not be tolerated when said by anyone in any school setting no matter what the circumstances, in an effort to unequivocally protect students from harm, no matter the intent.

Regarding the current instance of the use of a racial slur, and in applying the position and process used last year and into the beginning of this year, different viewpoints from many facets of our community are surfacing.

Let me be clear, there is no doubt that language matters and racial slurs are harmful. However, at this point we have an opportunity to look more deeply into the response to the use of racial slurs in our schools. In order to do that, we need space for discussion and thinking more deeply about the process.

Employees always have the right to appeal decisions and we will move this process forward as quickly as possible. As we go through the appeal process, we will also be conducting a review of the current approach around racial slurs."