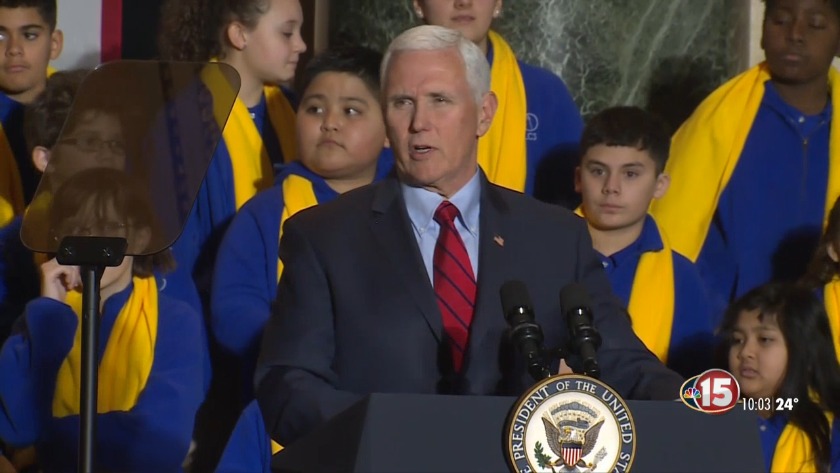 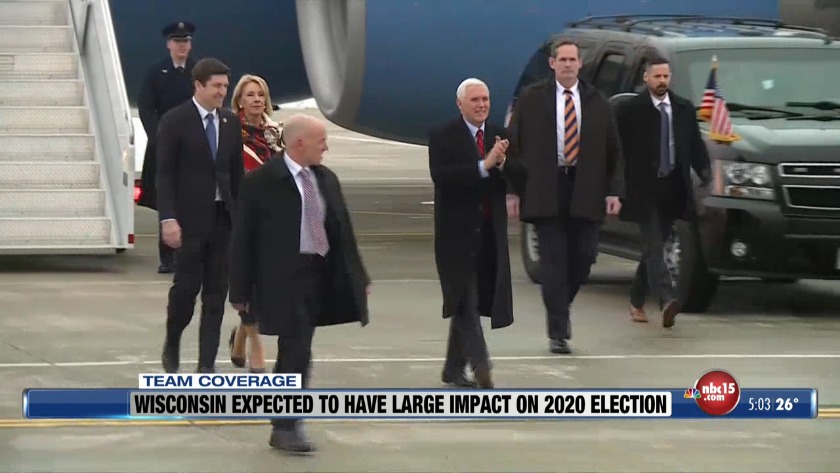 He chose Wisconsin to tout National School Choice Week on Tuesday because the state is where the private school voucher program began under former Governor Tommy Thompson.

“I was for school choice before it was cool,” Pence said, during his visit to Madison. “I watched this movement grow over the last 30 years. I’ve seen firsthand the thousands of the promising young lives it touched in my home state of Indiana, and all across this country.”

Pence criticized a bill proposed by state Democratic lawmakers that would phase out school choice programs. He noted Governor Tony Evers was not present at the Capitol, but had a message for him.

“Let’s make sure he hears us, we’re not going to let that happen,” said Pence. “Wisconsin, for our kids for our families, for our future, school choice is here to stay.

Pence’s Madison visit came came two weeks after he was with President Donald Trump for a campaign rally in Milwaukee.

Pence and DeVos promoted a new tax credit program that would provide $5 billion towards private school scholarships and tuition for any type of education parents want for their children.

“The time for education freedom scholarships is now,” said Pence. “It will build on the progress that you’ve made, right here in Wisconsin. For the past 30 years, Wisconsin has shown again and again, that when parents are given the opportunity to choose the best school for their children, whether that is public, private, parochial, Christian, or home school, outcomes improve, kids do better and education improves for everyone.”

Protesters were on the first floor of the Capitol, voicing their opinions against school choice by chanting “shame” or booing speakers during the showcase.

The vice president’s appearance in the Wisconsin Capitol marked the first time a sitting vice president held an event inside the building.

According to records from Wisconsin Department of Public Instruction, the total number of students and state aid payments for school choice programs have increased in the past four years.

DPI records show the total student enrollment in public schools for the 208-19 school year was 858, 833 students. Total state aid for schools was $5.63 billion.

Air Force Two is on the ground here at Truax field in Madison! Vice President Mike Pence is on the plane with Secretary of Education Betsy DeVos and @RepBryanSteil. @nbc15_madison pic.twitter.com/bdXfEvAN4z

Protesters starting to gather outside the Capitol...that sign the protester is holding says, “Mike Pence should convert to unemployment.” @nbc15_madison pic.twitter.com/SyIS9obOWw

Vice President Mike Pence has arrived at the Capitol. pic.twitter.com/kn7mH5EO8z

Protestors on the ground floor chant “shame” as @BetsyDeVosED begins her speech. pic.twitter.com/HYGHL3jL2q

Just landed in Madison with @Mike_Pence and @BetsyDeVosED! pic.twitter.com/F0sVF3k51j

Suspicious package determined to be safe at Hartmeyer Ice Arena

Suspicious package determined to be safe at Hartmeyer Ice Arena