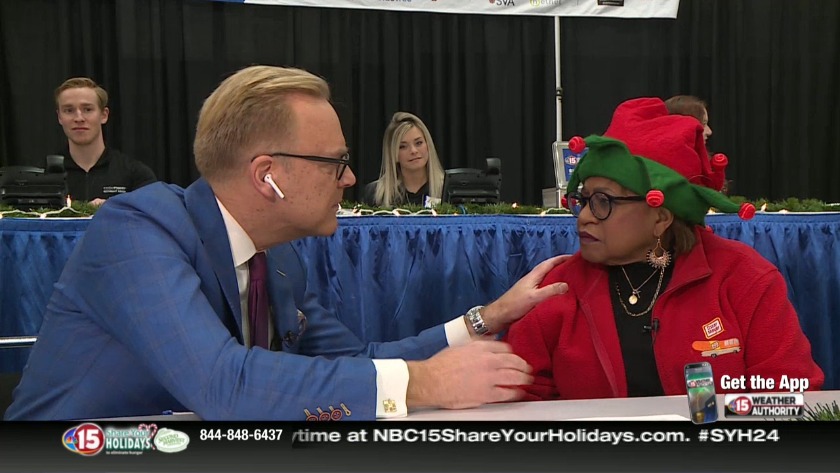 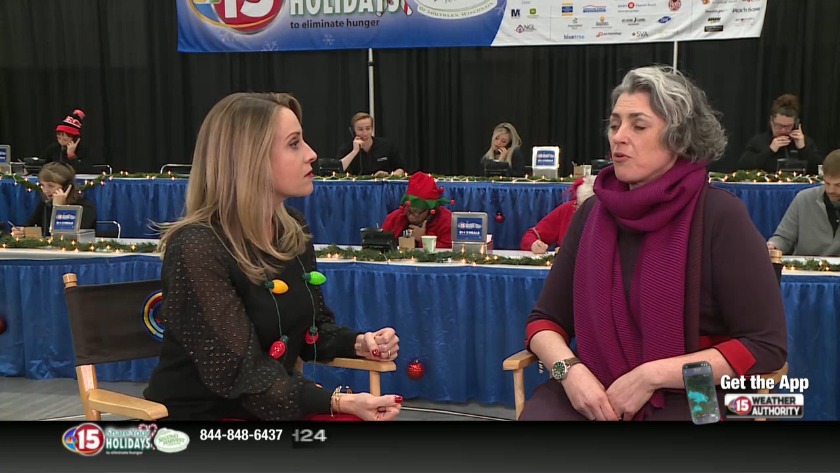 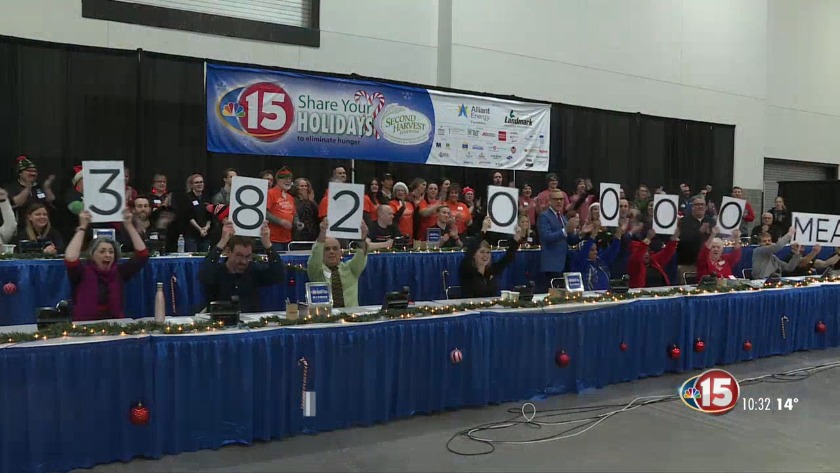 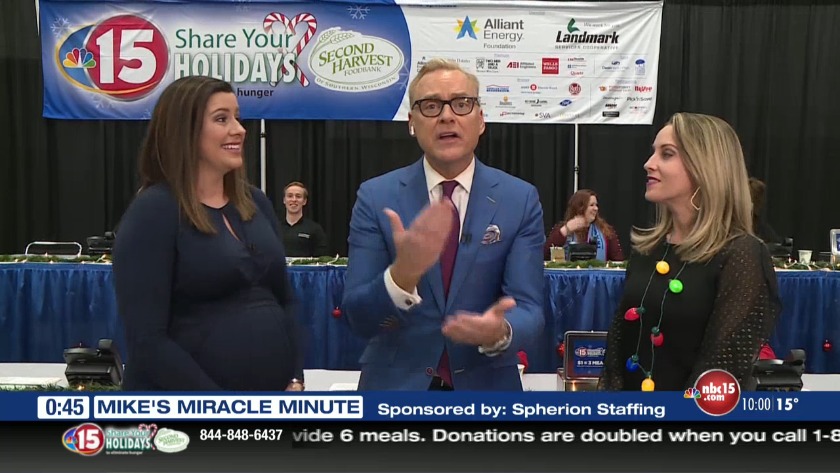 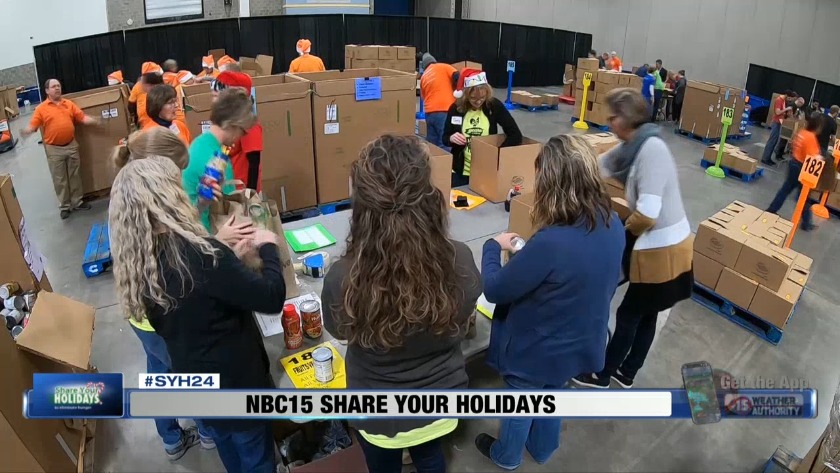 Share Your Holidays: A look back at the grand finale 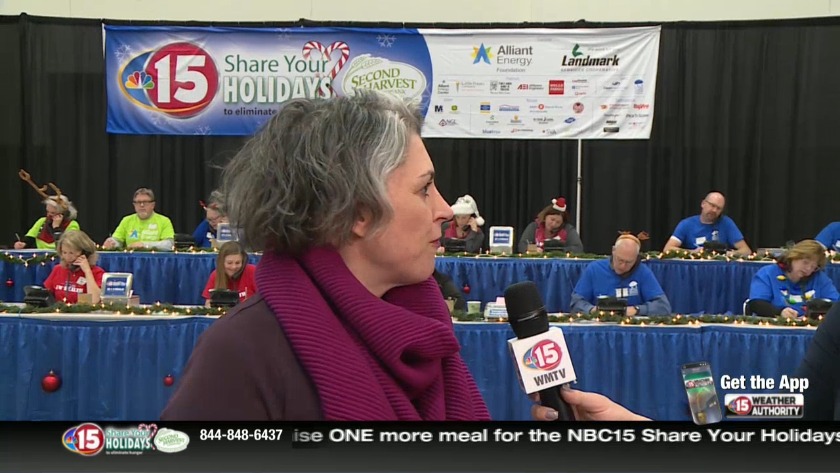 Share Your Holidays: The impact of Second Harvest Foodbank 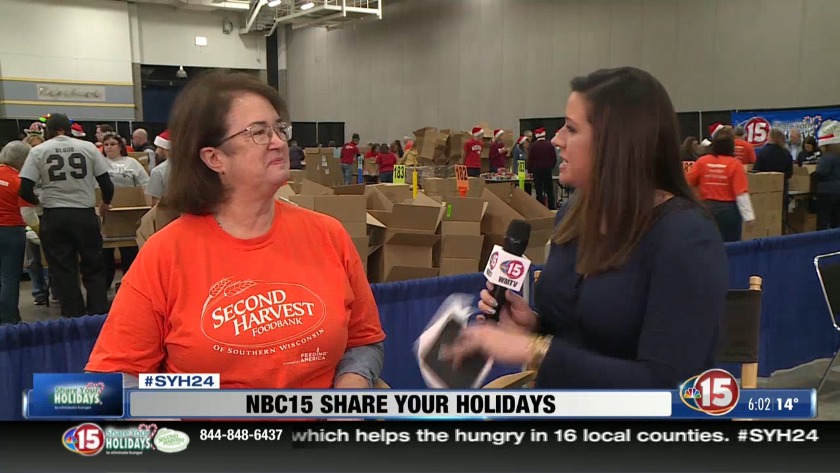 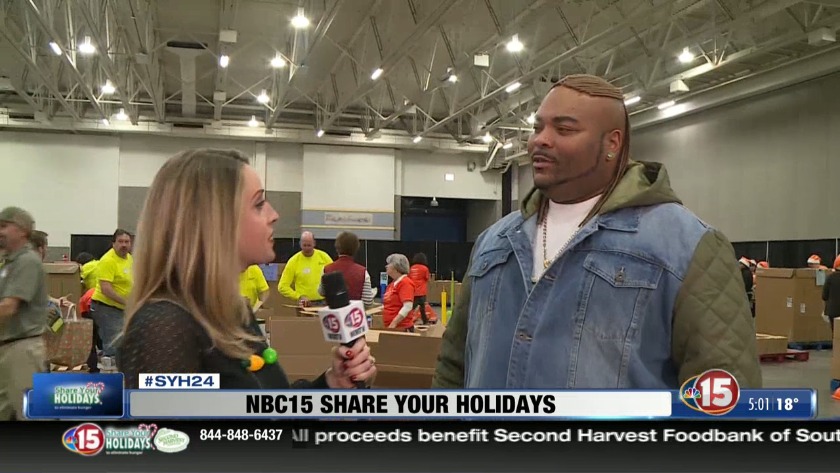 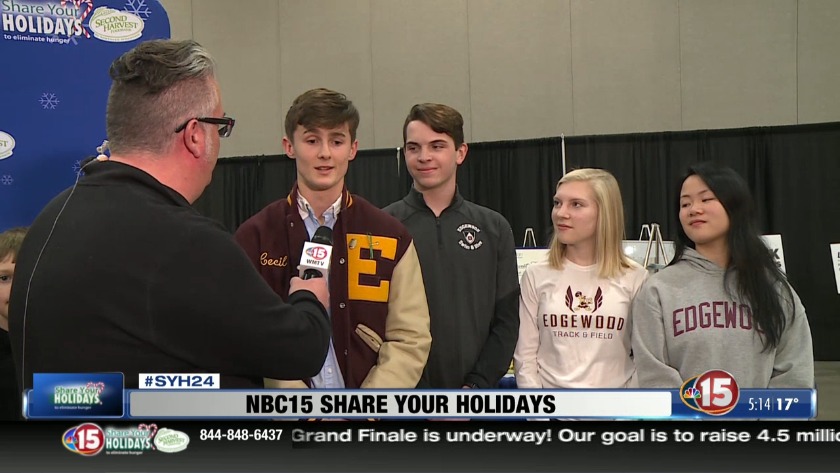 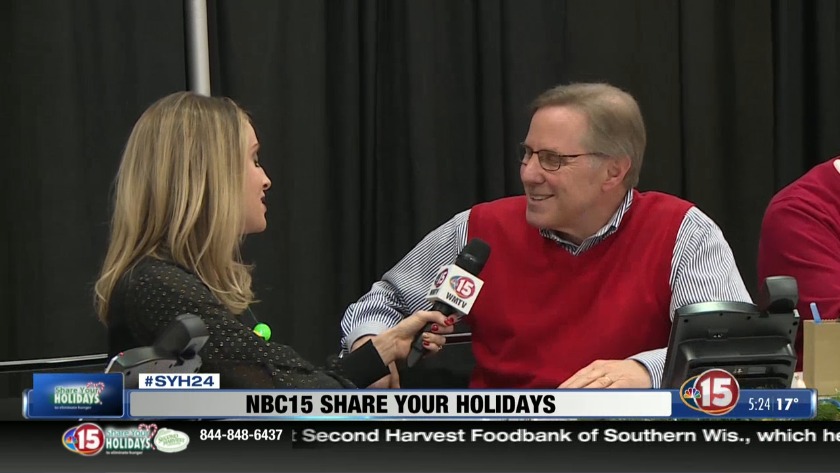 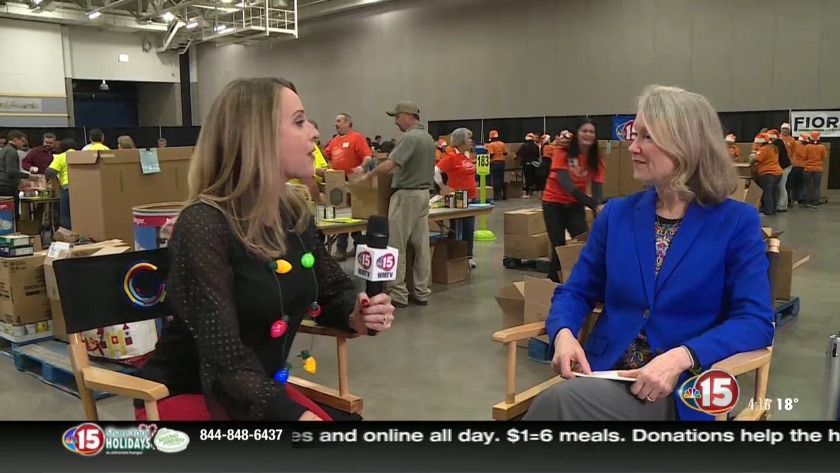 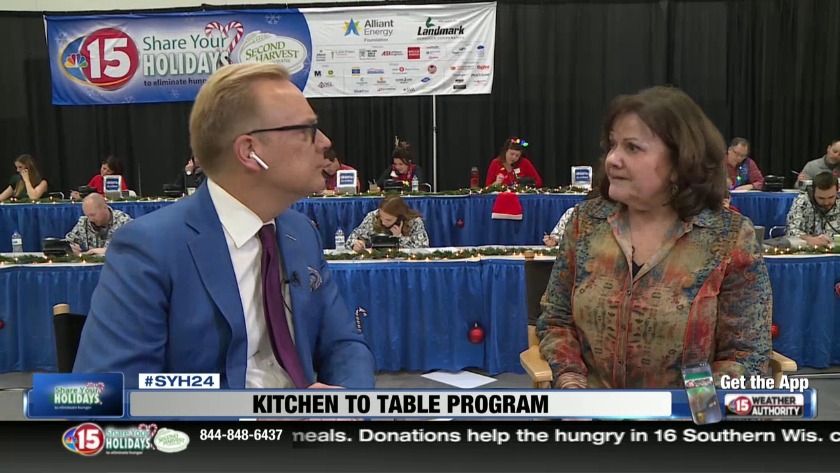 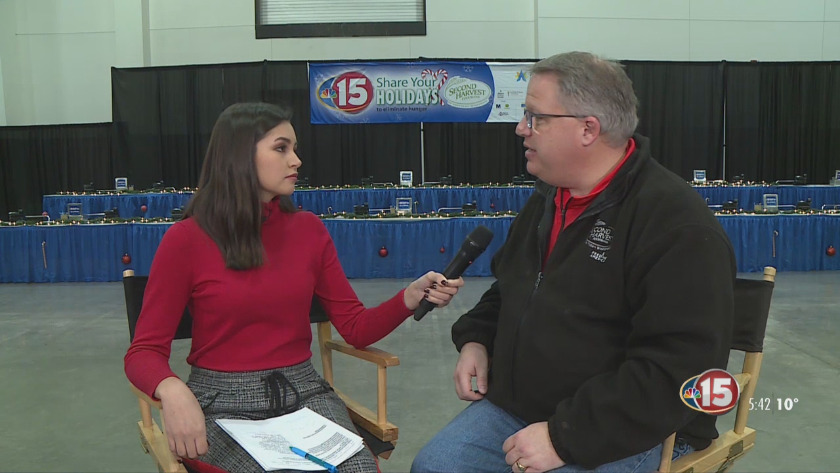 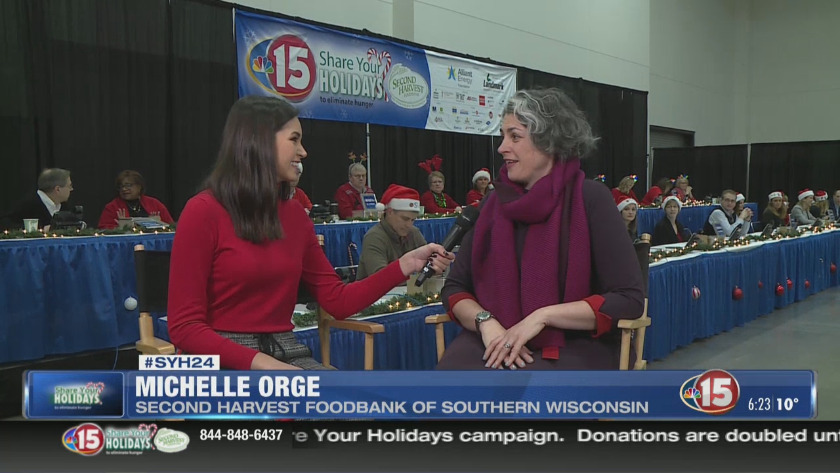 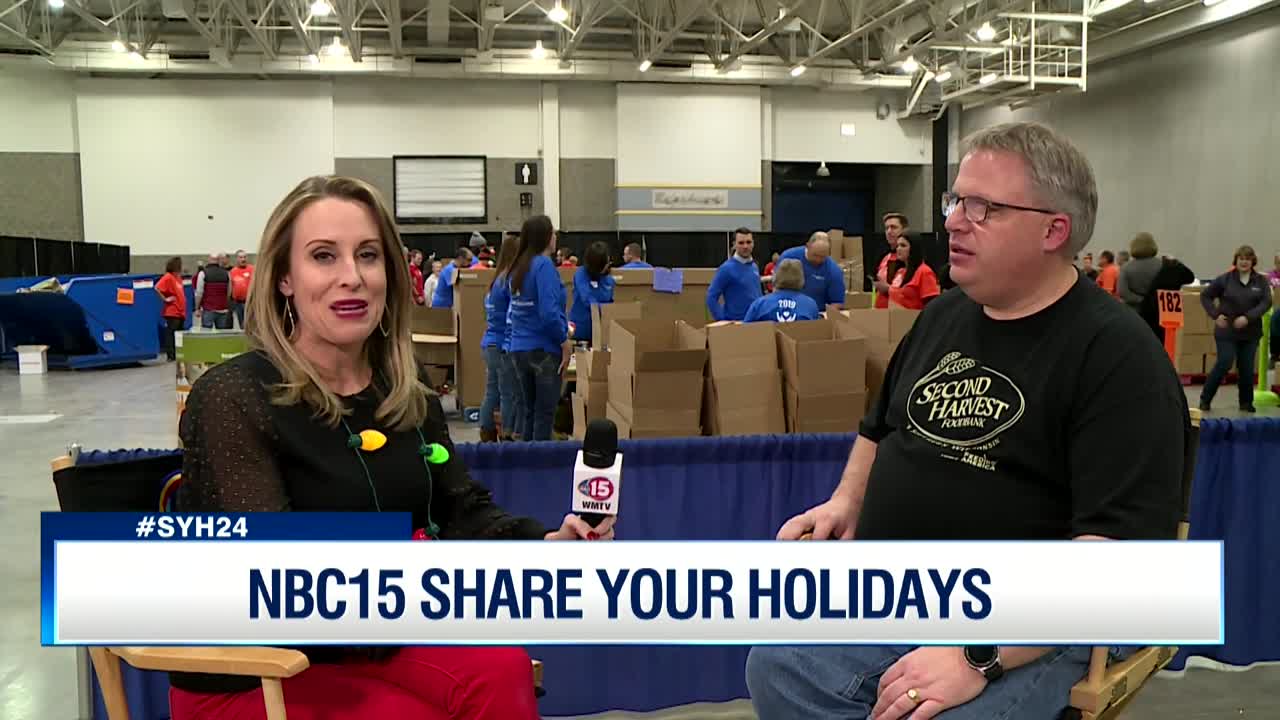 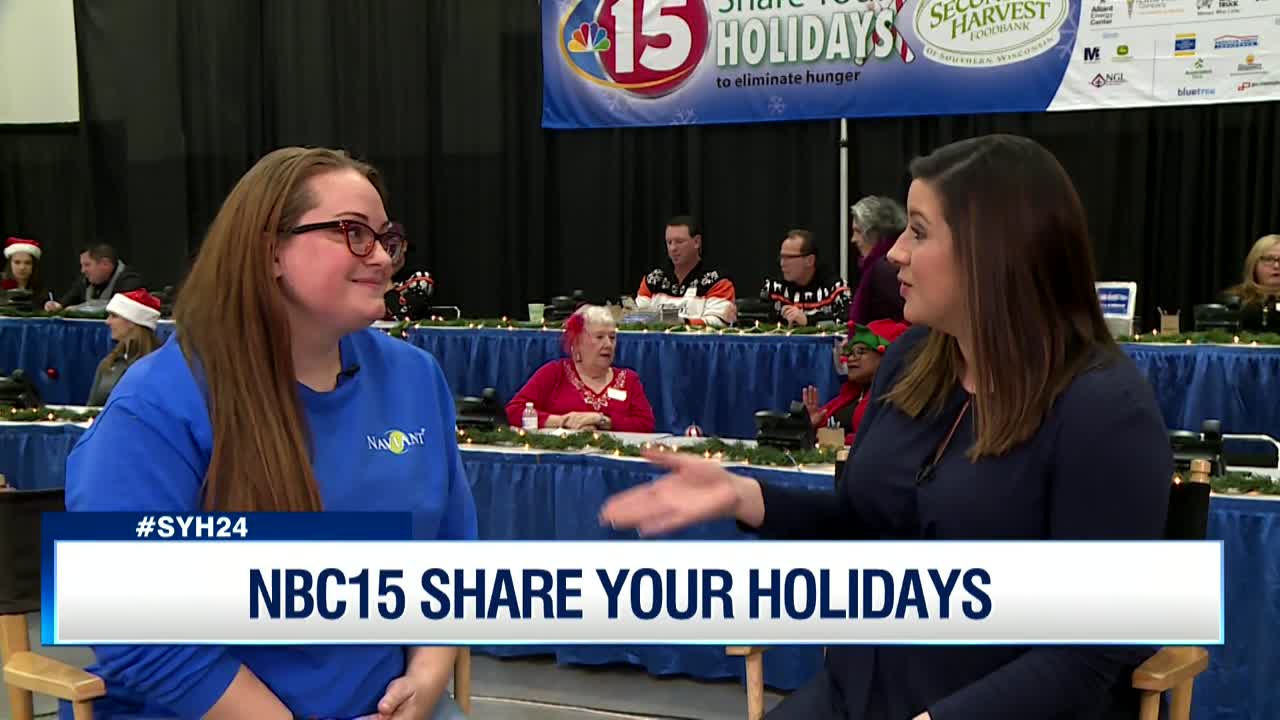 The Grand Finale announces the number of meals raised so far! (Source: WMTV)

Normally, one dollar would provide up to three meals, but on Wednesday, each donated dollar was doubled-- providing up to six meals for Second Harvest Foodbank of Southern Wisconsin.

Online donations were doubled all day until 11:59 p.m. Pledges were also matched when donors called 1-844-8HUNGER (1-844-848-6437) during a Mike's Miracle Minute. Those minutes are named after NBC15's late anchor, Mike McKinney, who began Share Your Holidays in 1996. The Mike's Miracle Minutes are sponsored by different businesses and occurred at 24 select times throughout the day.

"Each year, Share Your Holidays demonstrates the power of giving," said Don Vesely, WMTV Vice President and Manager. "I'm truly humbled by the number of companies, schools, organizations, and viewers working towards a common goal: eliminating hunger. NBC15 and Second Harvest Foodbank can only achieve these milestones with the generous donations of our local communities, and we thank you."

Volunteers at the NBC15 Share Your Holidays Grand Finale also sorted 70,000 pounds of food at the Alliant Energy Center, where NBC15 crews held live broadcasts throughout the day.

For Michelle Orge, Second Harvest’s new CEO and President, it is her first year experiencing the campaign.

As Orge steps in, former President and CEO Dan Stein looks back on his time with Second Harvest Foodbank of Southern Wisconsin.

“I really underestimated when I began, the size and the scope of this problem in southern Wisconsin. 125,000 different people needing help each year,” he said. “The incredible, generous donors who want to help. It’s a non-partisan issue. They know everybody deserves to have food and they step up with food, with money. Volunteering their time or their voice to raise money.”

"All of what we can accomplish at Second Harvest is because of volunteers," volunteer project supervisor Scott Lyon told NBC15 News during the 10 p.m. live broadcast. "All the volunteers are working on packaging up all of those donations of food into different categories, so we can get it back to the food bank and onto our online store."

The NBC15 Share Your Holidays began Nov.1 and continues through Dec. 31.

This year, the campaign is honoring how “one” can make a difference. Whether the “one” is big, like donating a year's worth of food, or little, like sharing a social media post about hunger, every “one” makes a difference in our communities.

"Grand Finale night is especially humbling and amazing at once. Humbling because of the great need and amazing because of the number of people who give so generously to make sure others aren't going hungry," said Jessica Laszewski, WMTV NBC15 News Director. "We are so grateful to those who donate their dollars and their time-- allowing the Share Your Holidays campaign to have the impact it does."

According to the agency, it provides 14.2 million meals for 16 counties. They distribute food to 200 partner agencies and programs. 85 percent of food is received through donations.

The Share Your Holidays campaign has raised more than 45 million meals over the past 23 years.

"We really felt it encompasses all the different ways people support Second Harvest," said Tazelaar. "It’s not just through gifts or through a volunteer hour, or through running a pantry, or through the meals that people are providing to the people that are served. There’s so many different ways that people can help Second Harvest to spread the word that there are folks struggling with hunger, right here in our community.”

Schools across Southwestern Wisconsin donated food and money to the NBC15 Share Your Holidays Campaign.

The schools that raised the most meals included:

“Another thing like this just helps bring all of us closer together,” said one student from Edgewood High School. “We have kids encouraging each other to bring in stuff. It goes to great causes, great families. It’s just another reason to help."

Businesses also donated food and money to the NBC15 Share Your Holidays Campaign. Those raising the most meals include:

For Badger Prairie Needs Network, the Share Your Holidays campaign has made a giant difference in its Kitchen to Table program.

"Second Harvest wrote a grant to Feeding America and the grant was all about our Kitchen to Table program, hoping we could go a little farther … go out and collect food from maybe locations in Green County or Iowa County and then also distribute the food with our van to smaller pantries in rural neighborhoods," said Marcia Kasieta of Badger Prairie Needs Network.

The Kitchen to Table program reduces waste by taking prepared food surpluses and delivering them to area meal sites and food pantries.

For places like St. Vincent de Paul, the Share Your Holidays campaign helps create meal diversity for those with unique needs.

"Second Harvest is the reason that we can have unique foods for people. Whether they have dietary restrictions, or cultural traditions, we know that when they come and shop we can provide a full shopping experience because of all the work that’s being done here today," said Lauren Cnare, St. Vincent de Paul.

“The love that we have up in here is basically, it’s just unbelievable,” said Isaac Hill, a St. Vincent de Paul client. “What St. Vinny’s has done for me, I know they can do for many others. And it’s just basically what they do is they help you, they help you make better decisions.”

Angela Bohnsack knows firsthand the effect something like the Share Your Holidays campaign can have on a family. This marks her third year volunteering with her company Naviant.

"It’s just a really great cause. I really enjoy the fact that our company gets so involved every year," she said. "Years ago, when my eldest son was younger and I was a single mom, we used to have to use the food pantry to kind of make ends meet and stuff, so it’s my way of giving back.”

Across Wisconsin, more than a third of households struggle to afford the basic necessities, like housing or food, according to a recent report from the United Way. The report looks at a population called ALICE. The acronym stands for Asset Limited, Income Restrained, Employed. The 2018 report looks at data collected in 2016.

One in six children are struggling with hunger, in Southwestern Wisconsin, according to Second Harvest.

“Rural areas have their own special needs with hunger, and so we decided to work with the school on building a weekend food program, a weekend meal program for these students and their families,” says Ginny Bean, who helped coordinate the PEC Pantry for kids in need. Campaigns like Share Your Holidays help make that program possible, working to eliminate hunger.

A year and a half ago, Brittney Campbell switched from being an online student to attending class in-person at Madison College. The change in status increased her commute costs and trying to afford food to feed herself and her daughter became tight.

“The services at school, emergency funding at one point, the pantry, and education I get with all the services is excellent,” said Campbell. “I am able to teach my daughter new recipes. We cook together and we get to try new ingredients. It’s really nice to have the support not only to help myself, but my growing daughter as well.”

Campbell volunteered answering phones at the Grand Finale Wednesday, because she is thankful for the help she received in her time of need.

“I take every opportunity to volunteer myself. Seeing all these people here with smiles on their faces doing something that helps a lot of people is just amazing,” said Campbell. “You have two hands, which is more than zero.Take every opportunity to get out there and give back. You are helping people that don't even know who you are, and it doesn't matter because you are doing good.”

Share Your Holidays Legacy
In 1996, NBC15’s late anchor Mike McKinney had a mission to eliminate hunger in the Madison community by holding a one-day food drive outside Metcalfe’s Market at the Hilldale Shopping Center. That year, NBC15 Share Your Holidays was born and more than 50,000 meals were raised.

Each year the campaign continued to grow. In 2018, 4.45 million meals were raised during the NBC15 Share Your Holidays campaign. Mike’s mother, Barbara, continues to volunteer at the Grand Finale each year-- to carry on his legacy and she hopes to help us reach 2019’s goal of 4.5 million meals.

"It makes it so important to me because the word legacy was used. And legacy means that something that was started, continues to be important, continues to grow and continues to show people care," said Barbara Harrington-McKinney. "Even though Mike started it, for some reason this year was deeper in the meaning, because it said a little black boy from St. Louis, Missouri, has started something that has grown so big."

The NBC15 Share Your Holidays campaign continues through Dec. 31. You may continue giving by adding a donation to your grocery bill at participating stores through Dec. 31. 'Check Out Hunger' is happening at Metcalfe's Market, Hy-Vee, Pick 'N Save, Woodman's Markets, and Whole Foods. To learn about other ways you can donate, click here.

From all of us here at NBC15, we cannot thank you enough for putting your power into action and putting meals on the tables of those in need.

"Thank You on behalf of people you will never meet. Those are people why Share Your Holidays, is so amazing. It not only puts food in people’s homes, but it also gives people who may be going through a dark time, some light. Those who have a sense of despair, hope, and more importantly, to show that people care, that this community cares, and that is what Share Your Holidays is all about.” – Mike McKinney, late NBC15 anchor/NBC15 Share Your Holidays founder

Just a few of the great people up early to kick off #SYH24 - your donations are doubled online all day and doubled when you call 1-844-8HUNGER during a Mike’s Miracle Minute! ⁦@SecondHarvestSW⁩ pic.twitter.com/Tkl2sl8tFf

Thank you @EdgewoodHSMad family for being so generous and donating to #SYH24. You make our community a better place to live. pic.twitter.com/e8yIEbSOiA

We are taking your donations all day! 1-844-8HUNGER #SYH24 pic.twitter.com/Q6aqxsP3YR