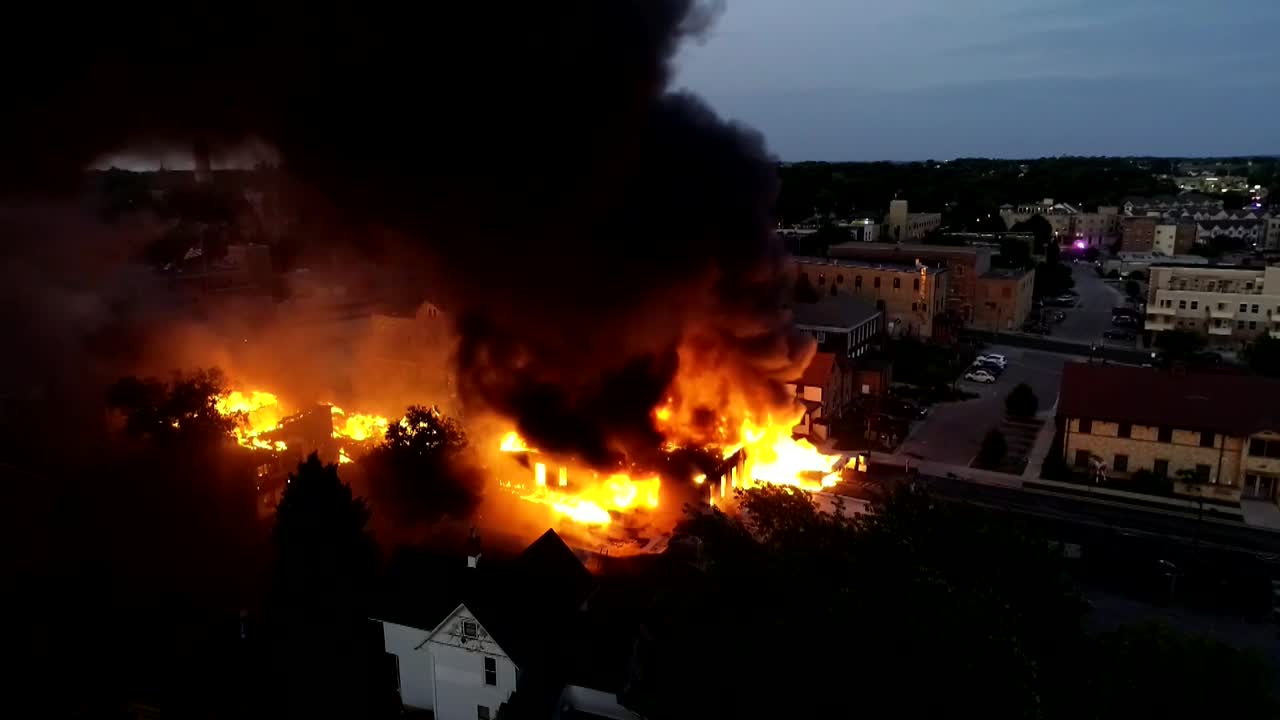 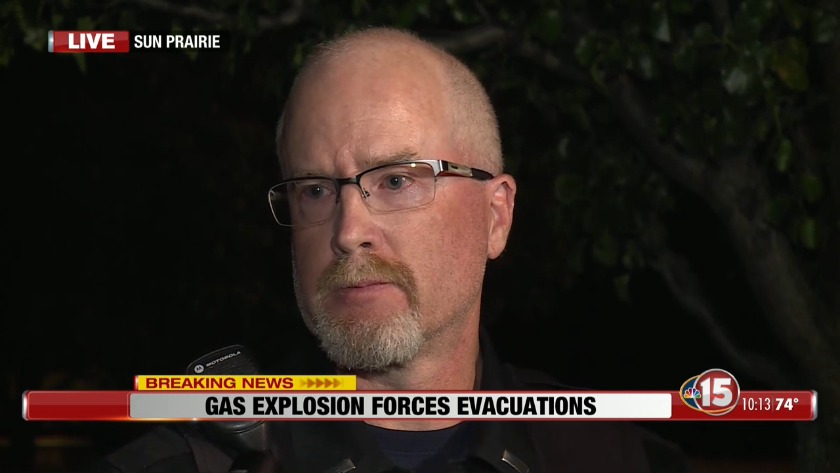 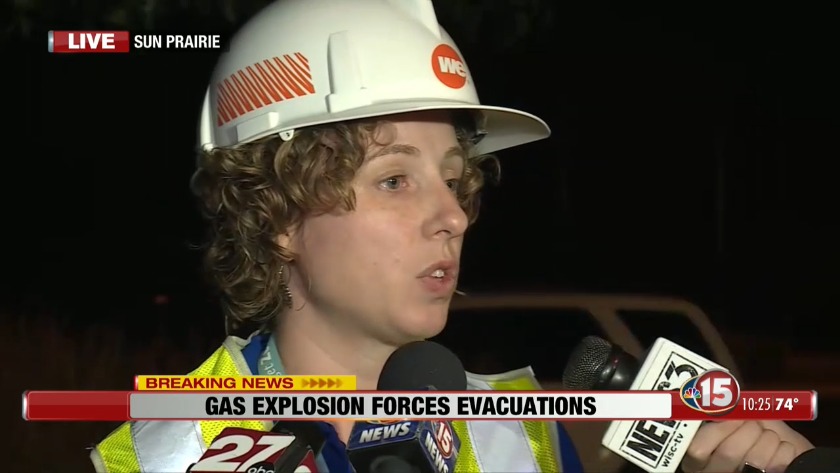 Interview with Amy Jahns, We Energies

SUN PRAIRIE, Wis. (WMTV) -- An explosion in downtown Sun Prairie Tuesday evening leveled at least one building and prompted evacuations of homes and businesses within a half-mile radius.

We Energies spokeswoman Amy Jahns said in a press conference that a contractor who is not affiliated with the company hit a We Energies gas line, causing a leak and then an explosion, Jahns said. The explosion happened at the intersection of Main and Bristol Streets.

Two firefighters were taken to a local hospital and a police officer was treated on the scene, according to Lt. Kevin Konopacki of the Sun Prairie Police Department. Several civilians were also hurt and treated at the scene, he said. The condition of those hospitalized is not being released.

Several buildings were significantly damaged, and there's no timetable yet for when people will be allowed back in the half-mile radius/evacuation zone. Konopacki said several nearby businesses including Sun Prairie's City Hall, located two blocks from the explosion site, will be closed on Wednesday.

"We will be closing city hall until further notice, so right now, what has to happen is the fire department has to secure that fire-- that residual fire that is going on. Once they do that, they will then go in and basically do a search and rescue, to see if there's anyone else that's missing, that's hurt," Konopacki said.

Fire crews will monitor the area overnight for any flare ups, and work with utility crews to ventilate gas and sewer mains. All 12 gas mains have been shut down and a half mile radius has been blocked off from the scene.

"About 500 of our customers are affected by this. The natural gas has been turned off to those areas and what we're doing is, we're going to be waiting on the authorities to tell us when we can go in to relight those customers, but obviously it's still a very active situation," Jahns said.

Fire crews worked into the evening and flames could still be seen from Sun Prairie High School, nearly one mile away just before midnight.

The gas leak was reported at 6:21 p.m. Eyewitness reports came in after 7 p.m. that a plume of smoke was seen near Main and Bristol Street at the Barr House, 100 W. Main Street. Razor Sharp Screen Printing and Glass Nickel Pizza were also significantly damaged.

Shortly after arriving on scene NBC15 crews spoke with a family who narrowly escaped the blast. They were at The Barr House for their weekly bingo night.

"We were sitting there and we saw them digging they were putting rocks down and all of a sudden it looks like a geyser water is going up on and then you could see the air got a little bit hazy and we started smelling this really disgusting smell," explained Jamie Ehrler.

Robin and Jamie Ehrler said they were asked to leave the establishment. The Ehrler's had just returned to their nearby home when they heard the explosion.

Jamie described the scene, "you just hear an earthquake type of shake and a big 'baboom' that goes."

Robin Ehrler said her family is close with both the family who owns the Barr House and the nearby Razor Sharp Imaging.

"They both have young families, so it is really sad that they have to go through this. They just lost their livelihood," Robin said.

"It's just really sad to think about all the small businesses and small communities affected by this explosion," Von Klopp said.

While a full list of impacted businesses is not yet available, Konopacki reflected on the community response to the explosion.

"There's a reason I love living in Sun Prairie. The response from this community has been fantastic and it's not people coming up saying 'whats going on, what can you tell me' it's people coming and saying 'how can I help,'" Konopacki said.

Officials NBC15 that nearby residents, including a nursing home were among the evacuees. Forty-five seniors from the Sun Prairie Health Care Center were brought to the Dean Clinic on Tower Drive. Senior, assisted-living residents are staying where they are due to a "shelter in place."

The City of Sun Prairie warned residents near the Main Street and Bristol Street intersection not to use electrical devices, open flames or anything that could create a spark or start a vehicle.

The Red Cross and Salvation Army are stationed at Patrick Marsh Middle School. The Department of Justice victim witness unit is also on the site.

Sun Prairie resident Tricia Budig lived just up the street from the explosion.

"Basically everybody was out of their house at that time and we did go down and check things out and it was just horrific, absolutely horrific," Tricia Budig said. "I was asked to help direct traffic, so I did that for about an hour and we just did what we needed to do."

Her daughter Helen Rose Budig was grateful for her neighbors' quick response.

"I feel like the neighbors did a really great job of knocking on everyone’s door and making sure everyone was ok, everyone had what they needed before they could get out and leave," Helen Rose Budig said.

"The words of encouragement for our first responders, people coming up saying, 'hey we're wishing you guys the best and anything that we can do.' That's great stuff and I'd be remiss if I didn't relay that on. I apologize for getting a little emotional there-- this community, this community is great to live in," Konopacki said.

"There are a lot worse things that are happening in the world right now so we got to keep it in perspective," Tricia Budig said.

A spokeswoman with TDS Telecom issued a statement Tuesday evening:

"We are aware of the explosion in Sun Prairie, Wis. We have talked with our contractors who are working on our behalf in the area. We have confirmed to the best of our ability that they were not working in the area tonight. We are continuing to gather information and analyzing the situation and working as quickly as possible in order to act in the best interest of the community. Our first priority is our employees and the citizens of Sun Prairie and ensuring their safety. We will provide updates as we learn more."

Watch The Morning Show Wednesday morning from 4:30-7 a.m. and stay with NBC15.com for the latest information.