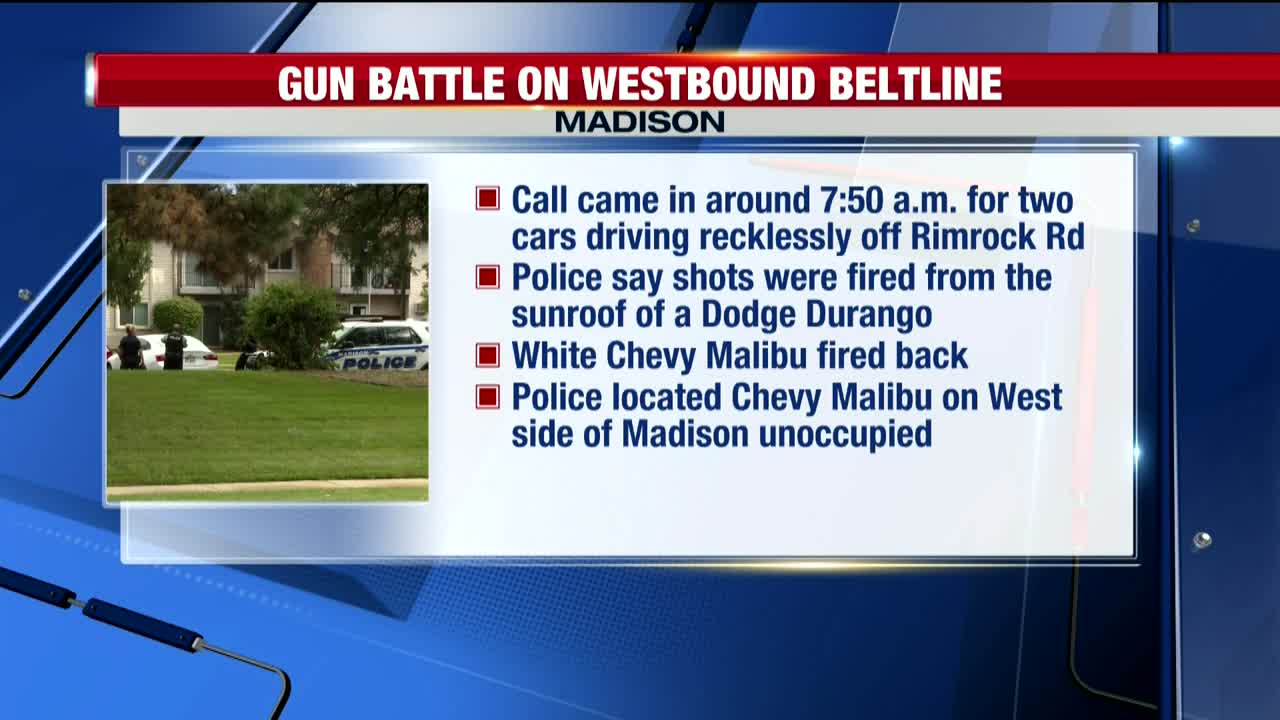 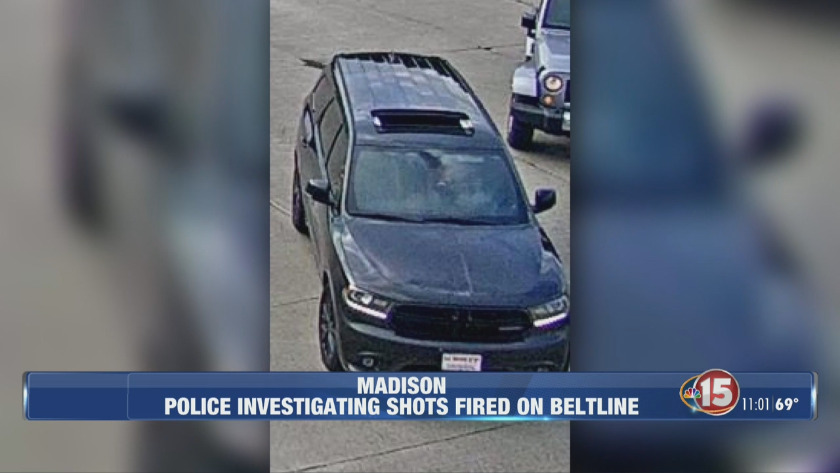 Madison police officers search for evidence following a shootout between an SUV and a car on the Beltline Aug. 16, 2019. Image of SUV involved in the incident provided by MPD.

According to Dane County Dispatch, the original call came in at 7:49AM for two vehicles driving recklessly on the westbound Beltline near Rimrock Road.

Police say the call was for a dark colored Dodge Durango and white Chevrolet Malibu playing "cat and mouse" and the caller said it looked like a road rage situation.

"We've got multiple witnesses telling us an individual was hanging out of the top of a sun roof of a Dodge Durango firing at a white sedan," said Madison Police Public Information Officer Joel DeSpain.

Despain police believe the people in the vehicles were in an on-going dispute, and knew of each other.

DeSpain said the investigation revealed shots were being fired at the Durango from the white car as well.

The SUV left the Beltline at Rimrock Road and headed towards John Nolen Drive.

The white car continued heading west on the Beltline towards the city's West Side. DeSpain said the car was found unoccupied with a bullet hole. They are looking for the people that were inside the car.

Police located the SUV unoccupied around 10:45 a.m. They are not disclosing where they found the vehicle.

Both vehicles involved in this morning’s West Beltline rush-hour
gun battle have been located. They were unoccupied. No suspects located at this
time. pic.twitter.com/U4rWxsgaF4

There are no reports of injuries. DeSpain said a man driving on the Beltline at the time of the shootout found a bullet hole in the back of his pickup truck.

Investigators were on the Beltline following the incident to gather evidence and search for shell casings along the highway. The right lane and shoulder on the westbound lanes near Rimrock Road were closed during the investigation.

Despain said, while shots fired incidents this year are down, police are concerned.

"We take a look at our overall numbers, we are down this year in terms of shots fired, about 30 percent decrease. We have been arresting a lot of people who we know have been armed and firing guns in our community, some of those people are put away, but obviously we still have a lot of weapons out on the streets," he said.

Detectives are asking anyone who witnessed the shots being fired to please call Madison Area Crime Stoppers at (608) 266-6014.

#BREAKING @madisonpolice investigating reports of gunfire on the WB beltline at the Rimrock Road exit. That exit ramp is closed. Beltline is open but slowdowns expected. Officers are looking for shell casings @nbc15_madison pic.twitter.com/sVxmt1Rg7g

Heiden gets life in prison for Two Rivers toddler's death

Sexting: What does Wisconsin state law say about it?

Heiden gets life in prison for Two Rivers toddler's death

Sexting: What does Wisconsin state law say about it?