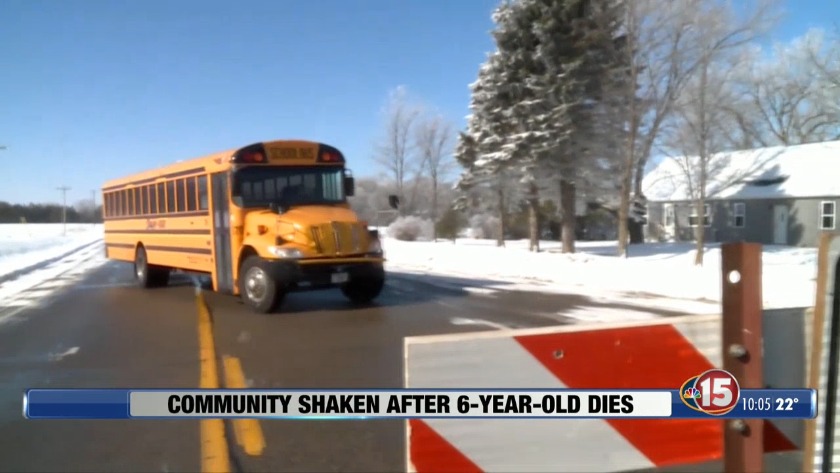 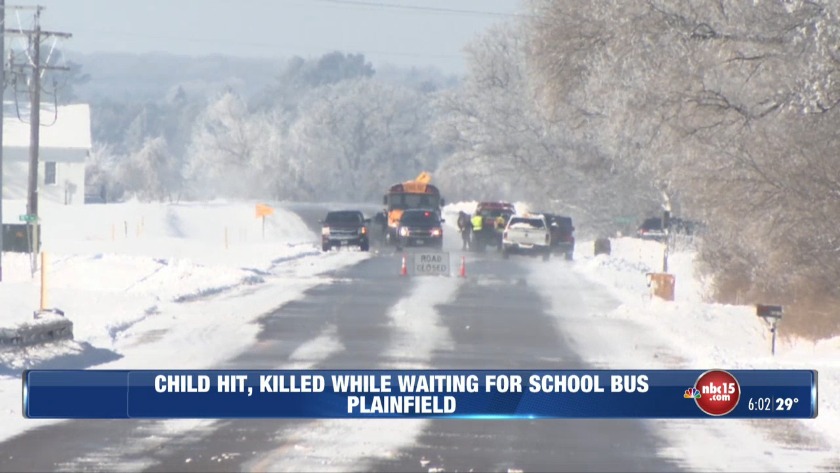 PLAINFIELD, Wis. (WMTV) -- A 6-year-old girl is dead and her 4-year-old sister injured after they were hit by a pickup truck while trying to get on a school bus near Plainfield, in Waushara County, Monday morning.

A school bus drives away during the crash investigation on Highway 73. Officials tell us a car passing the school bus hit two children, killing one (WBAY photo)

The bus driver had stopped along State Highway 73 at 11th Avenue in the Town of Oasis with its lights flashing around 7:15 a.m.

The girls had already crossed the road with other family members and were waiting to get on the bus when a Chevrolet Silverado pickup truck tried to pass the bus on the right-hand side. That's when the truck hit the girls, according to Tri-County Area School District Administrator Anthony Marinack.

The 6-year-old, a kindergartner at Tri-County Area Schools, was pronounced dead before first responders could transport her to the hospital.

Her 4-year-old sister, who's in the district's 4K program, was brought to a local hospital, where she was treated for minor injuries and has since returned home to be with her family.

Seven other students were already on the bus at the time of the crash, according to school officials.

The identities of the victims and the pickup driver have not been released.

The Wisconsin State Patrol is reconstructing the crash. The Waushara County Sheriff's Office is handling the investigation.

NBC15 News spoke to parents at Tri-County Area schools, including Jordan Franks, who said that his daughter knew the 6-year-old who was killed.

"The little girl was always happy, she would always give my daughter hugs," Franks remembered.

"It's a small school, everybody knows everybody," Franks said.

Even one family outside the community stepped up to help. Iris Duran and Arlene Bialk traveled to Plainfield Monday to accept a donation from the Tri-County Area School District.

However, after hearing what happened, the two women decided to donate the money to the 6-year-old girl's family.

"It's not going to bring her back, but hopefully it'll give them a little bit of peace," Duran said.

This is not the first deadly crash involving a school bus in the tri-country area.

As NBC15 News reported, on March 14, 2006 a school bus was hit by a semi truck near the Adams-Portage county line.

A 14-year-old student died from injuries received in the crash. He was an eighth grader at Tri-County Schools in Plainfield.

Five students were injured, plus the drivers of the bus and the semi truck.

The bus was carrying eleven students home when it was hit from behind on Highway 73.

Our sister station WSAW talked to the mother of David Senft Jr., Julie, back in 2016.

Julie worked with lawmakers to improve bus safety, including a bill that would require that the two rows of seats at the back of the bus stay empty, in case a vehicle crashes into the rear of the bus.

While that attempt to pass a state law failed during the 2009-2010 legislative session, as of 2016 about half of Wisconsin's school bus operators require students not to sit in those back two rows unless the school bus is full, according to the head of the state’s school bus inspection program, WSAW reports.