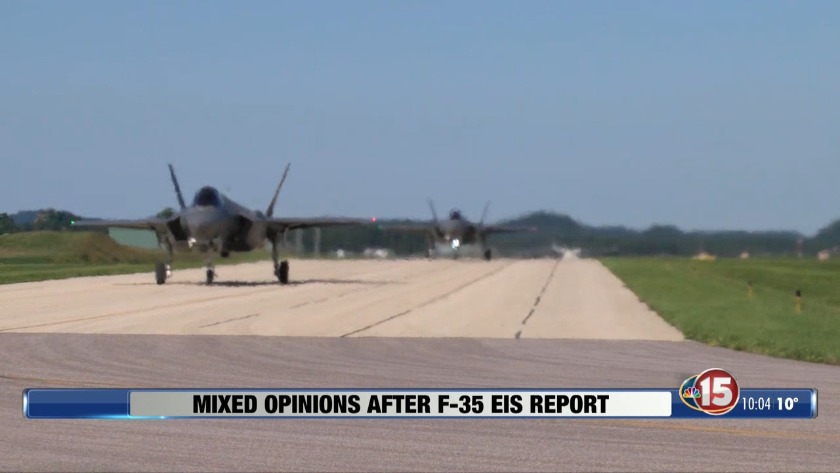 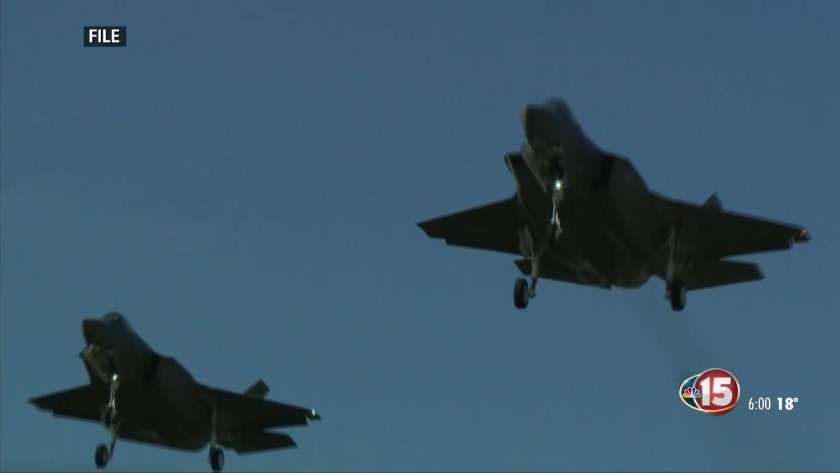 WATCH: Madison selected as a preferred location for F-35s

MADISON, Wis. (WMTV) -- The United States Air Force identified the 115th Fighter Wing in Madison as one of two preferred sites for F-35s.

The Secretary of the Air Force will announce their final decision in the next 30 days. Officials say the jets won’t be coming to Madison until 2023.

Federal officials say that the goal of the jets is to support the Air Force by maintaining well-trained, well-equipped units available for mobilization during wartime, as well as provide assistance during national emergencies.

The Air Force was originally considering five locations across the country to base the F-35's. The preferred locations were narrowed down to two on Wednesday: Madison, as well as Montgomery, Alabama.

Replacing the F16s with F35s would cause a "significant" increase overall noise in the area near Truax Field, the EIS found.

According to the FAA, a 65-decibel DNL is “is incompatible with residential communities.” The term incompatible does not mean uninhabitable.

The noise level of 60 decibels is equivalent to the sound of an air conditioner.

People in affected areas may be eligible for mitigation such as soundproofing from an FAA program. The Aviation Noise Abatement Policy considers the level a “significant annoyance for most residents.”

Environmental Justice and the Protection of Children

The final EIS found “significant disproportionate impacts to low-income and minority populations as well as children.”

The noise impact to the south would disproportionately impact low-income areas. Impacted areas east of the airport would affect low-income minorities.

The report found a negligible impact on the housing market in the city. Overall lost property value would be between 0.03 percent and 0.27 percent of the Dane County tax base.

Construction spending for 19 additional structures at Truax would have short-term benefits for the local economy.

Rep. Chris Taylor, who has been an opponent of basing the F-35s at Truax, voiced her opinion in a statement Wednesday:

“The Final EIS for this proposal confirms what many of us already knew: that these jets are wrong for our community. These new details solidify the horrible impacts on low-income individuals, people of color and children, and these impacts will only worsen the severe racial disparities that plague our city and county," according to Taylor.

The 115th Fighter Wing voiced their continued support for the F-35s in a statement to NBC15 News.

“We are grateful to the local community for their support and participation in the process, including all of the concerns submitted during the public comment period that ended Nov. 1st of last year. We are glad to see that the process is moving forward with the completion of the Final EIS, and we look forward to the Record of Decision in the near future," according to the 115th.

Madison Alder Syed Abbas was disappointed with the Air Force’s decision to name Madison as the preferred location for the Fifth Operational Beddown.

He posted in his blog that he has not had a chance to read the lengthy report, but he still opposes the Air Force’s decision.

“As your alder, I have strongly opposed and stood against F-35s coming to Madison on the public forum as well as at the Common Council,” wrote Abbas. “I have been advocating for your voices in opposition and I will stand with you to fight against the environmental and racial injustices. I will continue to strongly oppose the F-35s.”

In August of 2019, the Wisconsin Air National Guard addressed the concerns people may have with the F-35’s coming to Dane County. They said their current F-16’s are pushing 30 years old and the new jets will allow them to complete operations efficiently.

Lawmakers and people who live in the area were concerned about noise from the jets and displacement of low income communities. A public hearing was held in September of 2019 at the Alliant Energy Center for people to hear about the beddown and to speak about their concerns.

That same month, Madison's Common Council, after eight hours of public hearings and debate, passed a resolution calling for the Guard to release more information regarding basing the jets at Truax. Many cited concerns over the impact the jets would have on low-income communities, like noise issues and pollution, while others listed the financial boost the rebasing would bring to the Madison area.

Final Environmental Impact Statement for F35s out today. Air Force still refuses to tell us how much louder these jets are at take off and landing. For Burlington VT, chart they got showed 4x louder than current F16s. Why is AF hiding this from us when I have asked repeatedly?

MPD: Suspected drug dealer had $12,000 worth of cocaine

Missing Fitchburg woman has been located and is safe

Driver killed after colliding with semi on Grant Co. highway

MPD: Suspected drug dealer had $12,000 worth of cocaine

Missing Fitchburg woman has been located and is safe

Driver killed after colliding with semi on Grant Co. highway